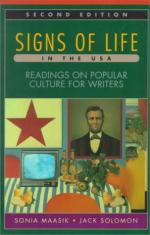 Sonia Maasik
This set of Lesson Plans consists of approximately 164 pages of tests, essay questions, lessons, and other teaching materials.

1. Why is the Oprah Winfrey show popular, according to Steven D. Stark?
(a) It focuses on sensationalism.
(b) It focuses on a variety of topics and includes celebrities.
(c) It provides American women an outlet for sharing their issues.
(d) It provides some kind of group therapy.

3. What is the name of the movie cited by the authors of the Text book as one of the most popular films of 2001?
(a) The Princess Diaries.
(b) Jurassic Park III.
(c) Pearl Harbor.
(d) Shrek.

6. Fill-in the blank. The more popular the television show _________.
(a) The more time it takes to conduct semiotic analysis.
(b) The less likely that students will skip watching it.
(c) The greater likelihood of celebrity characters in it.
(d) The higher priced is the advertising.

1. What are the products that may be promoted by advertisements employing the phenomenon, Democracy of Afflictions?

2. What is the impact on children of schadenfreude in reality TV shows?

3. What is Semiotics really about?

4. What is the main purpose of malls?

5. How do advertisers target kids as customers?

More summaries and resources for teaching or studying Signs of Life in the U.S.A..