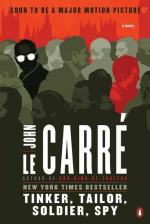 Tinker, Tailor, Soldier, Spy by John LeCarre is an exciting story about a mole who moves up to the highest levels of the British intelligence community. Based on the information he provided, the covers of some of the best agents were blown. They know he is there, but they don't know who or where and they have to find him. The safety and existence of the British intelligence community depends on it. How do they do it?

The exciting story begins as the mole becomes known when a Soviet trade delegate tries to defect in Hong Kong. The story comes to the British government from an agent, Ricki Tarr ,who has been missing for six months. The woman disappears but leaves a diary that tells the story of a Russian mole working in a highly-placed position in the Circus. They can't use too many people within the Circus because one of them might be the mole. The mole has access to the highest levels of Russian intelligence and is in a position to do a lot of damage to the British. They can't mount an obvious investigation without tipping off the mole, whose code name is Gerald. George Smiley, the Le Carre hero, comes out of retirement to help find the mole to help protect the integrity of the service. He must work outside of official channels since he is officially retired. He is considered out of bounds since his retirement, so he can't have any contact with the Circus employees.

The suspense filled novel has Smiley working with a few people that he feels he can trust and with retired Circus personnel. Smiley slowly and carefully gathers the information that he needs by whatever means is required. Some Circus personnel who know about the investigation are put in the position of having to steal the information that Smiley needs. Smiley is methodical in his research, paying attention to missing information and to inconsistencies and contradictions.

Le Carre slowly develops his characters, in many cases letting the reader figure out some of their roles and other identities before he reveals them in the story. For example, Operation Testify isn't introduced until late in the book, but details of the events are referred to throughout the novel. Jim Prideaux is introduced in the first chapter, but it isn't until later in the book that Smiley finds out where he is and the reader's suspicions of who he is are confirmed. This style of writing adds to the suspense of the novel as the reader trys to figure out the details before Le Carre explains them.

Tinker, Tailor, Soldier, Spy is one of a series of books about the Soviet master spy, Karla, who has made a career of making life difficult for the British. The book is a part of what is knows as The Karla Trilogy. It is a thrilling book that is hard for the reader to put down. Almost every page is packed with suspense and action. Readers will not regret reading this book.