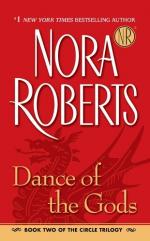 Nora Roberts
This Study Guide consists of approximately 56 pages of chapter summaries, quotes, character analysis, themes, and more - everything you need to sharpen your knowledge of Dance of the Gods.

Dance of the Gods Summary & Study Guide includes comprehensive information and analysis to help you understand the book. This study guide contains the following sections:

This detailed literature summary also contains Topics for Discussion and a Free Quiz on Dance of the Gods by Nora Roberts.

The Dance of the Gods by Nora Roberts is the second book in The Circle Trilogy that deals with the threat of a vampire war, led by Lilith, the self-proclaimed queen of the vampires, against all humanity. The book's main characters are a part of what is known as the Circle of Six, the six individuals who have been called together by the goddess Morrigan to learn how to battle the vampire threat that will destroy all the worlds. The Circle of Six is composed of a sorcerer named Hoyt from the 12th century, a modern day witch, Glenna, who are handfasted just before the story begins. The next character is Cian, who has been alive as a vampire since the 12th century, having been sired by Lilith. Cian is Hoyt's twin brother and has been called to join in the battle against his fellow vampires. From the land of Geall come the shapeshifter, Larkin, and Moira, the small, beautiful and studious scholar, who is to one day become Queen of Geall. The last member of the group is Blair, a descendant of Cian and Hoyt's youngest sister; Blair is a demon hunter from modern-day Chicago. The six have been called together to train and learn, in order to prevent the threat that will destroy the world.

The story is also a love story focused most closely on the lives of Larkin of Geall and Blair the demon hunter from Chicago. Both individuals are very strong, independent, opinionated, and as different from one another as they can possibly be. They are alternately fascinated and repelled with each other. Most of the drama is due to Blair's experience with her father, who rejected her when she was a young girl, only training her because it was expected of him, but taking no pride in her abilities and accomplishments. This causes Blair to have a horrible inferiority complex when it comes to valuing herself as a woman. Because of this, she keeps her real calling a secret from the man who wishes to marry her. On the advice of her aunt, Blair takes her fiancé with her one night to show him that there are demons in the world, and she takes care of the threat. Instead of being impressed and treasuring such a unique ability, her fiancé is repelled by her, not wishing even to have his ring back, a ring that has been on the hand of a monster. After two such traumatic events, Blair has accepted the fact that her role in life is to fight the demons of the world, but to never have a close relationship with another human being. She certainly has never experienced much family before.

Because of their close proximity, Blair comes to learn a great deal about humans and demons. She and Cian forge an uneasy truce because he is one of the demons she has dedicated her life to killing. He is also her many times removed great-uncle, whose much-loved little sister, Nola, is Blair's direct ancestor. Blair comes to admire Cian's abilities and knowledge and is interested in his motivation to fight against the vampires of the world, even though he shares their demon blood. Blair comes to enjoy female companionship with Glenna the witch and Moira, the future Queen of an imaginary fairy-tale country. Lastly, Blair finds companionship and love in the man called Larkin, a shapeshifter from the land of Geall. All the Circle of Six combine to create the family Blair has never had in her life, and her experience of it is poignant and tender.

From the time when they are all learning to work together, they find that they all have independent feelings and emotions. They all have unique talents and past experiences and working to put them all together into some sort of a cohesive plan is the setting for numerous dramas. What they all find, however, is that when one of the six is in danger our injured, all the rest of the circle gather to protect, heal or remonstrate. Such a group is unique in that the bonds they have forged will stand the test of all sorts of challenges that they face once they reach the land of Geall.

Once they arrive in Geall, the people are skeptical and suspicious of the strangers. It takes a lot of trust and faith in order for the people to believe in the threat that endangers them and to learn to fight that threat in order to save their very world. Larkin and Blair are the most important characters in The Dance of the Gods; it is their relationship and subsequent romance that entrances the reader, giving the reader an emotional roller-coaster ride as Blair is ambushed and very badly injured before she really knows what sort of man Larkin is. His love and his acceptance and admiration for who she is and what she can do is the very healing remedy for all Blair's injuries.

More summaries and resources for teaching or studying Dance of the Gods.

Dance of the Gods from BookRags. (c)2022 BookRags, Inc. All rights reserved.