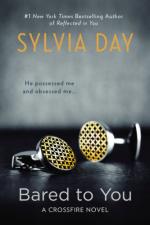 Bared to You: A Crossfire Novel Summary & Study Guide

Sylvia Day
This Study Guide consists of approximately 33 pages of chapter summaries, quotes, character analysis, themes, and more - everything you need to sharpen your knowledge of Bared to You.

Bared to You: A Crossfire Novel Summary & Study Guide Description

Bared to You: A Crossfire Novel Summary & Study Guide includes comprehensive information and analysis to help you understand the book. This study guide contains the following sections:

This detailed literature summary also contains Topics for Discussion on Bared to You: A Crossfire Novel by Sylvia Day.

"Bared to You" is a novel in The Crossfire novel series by author Sylvia Day. The story follows Eva Tramell, a recent college graduate, as she starts her new life in New York City and her new job as an assistant to junior account manager at an advertising agency. On the day before she starts her new job, Eva makes a test run of the route to her office. While in the lobby of The Crossfire building, where her office is, Eva runs into the most gorgeous man she has ever seen. This is but the first of many encounters with the man she finds out is the billionaire playboy, Gideon Cross.

There is no question that the chemistry between Eva and Gideon is nuclear. When the two first decide to become involved, the arrangement is for them to have a sexual relationship, with no strings attached. The more the two spend time together, however, the more each of them falls in love with the other. The underlying issue is the secrets that Gideon and Eva have.

Both were sexually abused as children. Dealing with their demons puts numerous twists and turns in the relationship. Not only does the sexual abuse remain an underlying issue, but problems with friends, roommates and ex-lovers returning to the scene, cause jealousy, fighting and eventually making up. In the end, however, Gideon and Eva realize that they can make it through anything as long as they have each other.

More summaries and resources for teaching or studying Bared to You: A Crossfire Novel.

Bared to You: A Crossfire Novel from BookRags. (c)2022 BookRags, Inc. All rights reserved.