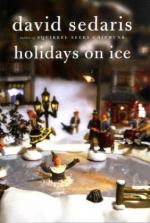 David Sedaris
This set of Lesson Plans consists of approximately 100 pages of tests, essay questions, lessons, and other teaching materials.

• He has no better options at the moment and needs to pay off his student loans.

• After a series of interviews and tests, Sedaris is hired.
• Sedaris finds the training to be terrifying, especially learning how to use the cash register.

• He has to learn sign language and be familiar with the various Santaland positions.

• He dreads the humiliation of wearing the elf costume.

• Sedaris names his elf persona "Crumpet" and tries to make his position interesting, which gets him reassigned.

• He endures insults and ridiculous behavior from adults.
• Sedaris takes pictures of kids with Santa.

• He is surprised by the number of adults who visited Santa without children.

• He spots famous people from time to time.
• Sedaris finds some of the elves interesting, especially the one who has connections to the soap opera...

More summaries and resources for teaching or studying Holidays on Ice.