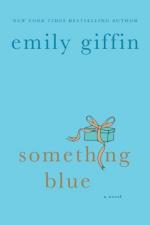 Emily Giffin
This Study Guide consists of approximately 55 pages of chapter summaries, quotes, character analysis, themes, and more - everything you need to sharpen your knowledge of Something Blue.

Something Blue Summary & Study Guide includes comprehensive information and analysis to help you understand the book. This study guide contains the following sections:

This detailed literature summary also contains Topics for Discussion and a Free Quiz on Something Blue by Emily Giffin.

Something Blue is a story about karma, self-realization, and finding true friendship and love. Darcy Rhone is a beautiful, well-connected publicist living in New York City. She thrives on maintaining appearances and believes her beauty is the key to getting a life of wealth and status. Instead, Darcy's self-centered ways lead to losing those closest to her, including her best friend and her fiancé. Darcy is finally forced to reexamine her life which leads to her decision that she needs to become a better person. Something Blue is about one woman's quest for the perfect life in Manhattan and London from a best-selling author of women's literature.

When Darcy is introduced to Dex by Rachel, she immediately believes he is perfect for the lifestyle she seeks. Darcy and Dex start dating and, following a seven-year courtship, they become engaged. Darcy admits she and Dex don't have much in common, but the life she envisions they will enjoy together is more important to Darcy than chemistry and shared interests. That is until Darcy meets Marcus.

Though Darcy doesn't think much of Marcus at first, when she sees his high-fashion date, Darcy's perception of Marcus begins to change. Soon Darcy begins to flirt with Marcus at every opportunity. Although Marcus attempts to deflect her advances, he is helpless against Darcy when they are alone one night in the Hamptons. The following morning, Marcus is repentant, but Darcy suffers little guilt. Marcus attempts to keep his distance, but Darcy is convinced she will get him and succeeds. When Darcy and Marcus find out she is pregnant, Marcus doesn't want to accept it and insists Darcy explore her options. Darcy, however, insists she wants to keep the baby. Darcy plans to break up with Dex immediately but Dex says the words before she has the chance.

Darcy arrives at Rachel's apartment to tell her about the break-up with Dex. In the midst of Darcy's confession of her own affair, Darcy notices Dex's watch on Rachel's nightstand. When Darcy finds Dex in Rachel's closet, her world crumbles. Darcy becomes obsessed with thoughts of Dex and Rachel. Darcy talks about them incessantly which at first amuses, then annoys Marcus. Darcy is continually disappointed by Marcus' behavior. Marcus is a slacker, a sloppy dresser, and isn't serious about what is important to Darcy. She is not the only one disappointed. When Claire, the social maven, hears Darcy is dating Marcus, she obviously disapproves. When Darcy's mother finds out Darcy is pregnant by Marcus, an argument erupts between mother and daughter resulting in Darcy and Marcus fleeing Darcy's family home.

Marcus kicks Darcy out of his apartment after an argument about baby names and later dumps her. Darcy is reeling from her losses. To add to Darcy's despair, Claire cuts her off when she finds out Darcy is pregnant. Just as Darcy is feeling at her lowest, Annalise calls. After hearing an update from Darcy, Annalise suggests Darcy stay with another childhood friend, Ethan, who lives in England.

True to form, Darcy insinuates herself not only into Ethan's apartment, but also into his life. From sleeping in his bed from her first night on, to questioning Ethan's whereabouts, Darcy behaves more like a suspicious wife than a roommate. On Thanksgiving Day, Darcy's feelings for Ethan begin to change. As Ethan shows Darcy his favorite places in London, Darcy becomes interested despite herself. At one moment, as Darcy and Ethan sit on a chair in Holland Park, Darcy is overcome with the desire to kiss him.

One night after a bad dinner out with Ethan's friends, Ethan shatters Darcy's view of herself. Darcy also finds out Rachel and Dex's affair began before her own affair with Marcus. When Darcy complains of Rachel's betrayal, Ethan shuts her down telling her she would have done the same thing. The following morning, Darcy feels her baby kick for the first time and decides to make a change. Her first day turning a new leaf, Darcy meets and befriends Meg and Charlotte, who give her the number of an obstetrician/gynecologist and and invite Darcy to a dinner party.

Darcy is happy with her new doctor, Geoffrey Moore, until he surprises her with the news she is having identical twin boys. Darcy, who believed in her heart she was having a girl, is destroyed by the news. Darcy decides to switch doctors and eventually does when she and Dr. Moore begin dating.

Geoffrey is everything Darcy is looking for in a man, yet Darcy still longs to spend her free moments with Ethan. When Ethan begins dating Sondrine, Darcy feels her space in Ethan's apartment is threatened. Ethan proves her wrong when he builds a nursery in the room Darcy no longer sleeps in. Both Geoffrey and Sondrine have a problem with Darcy and Ethan's living situation. Geoffrey continues to prod Darcy about living with him. When Darcy has a pregnancy scare, it becomes obvious she wants to be with Ethan or alone. Darcy breaks up with Geoffrey the following week, when Geoffrey visits with brochures of new homes.

Darcy goes into labor a week early. Ethan is by Darcy's side throughout her delivery and sleeps on a cot by Darcy's hospital bed every night until she and the babies go home. Darcy and Ethan spend the next few weeks feeding, bathing, changing babies and barely getting time to bathe themselves. Yet in the midst of it all, their feelings for one another continue to grow. Ethan breaks up with Sondrine one night over oysters. Ethan and Darcy joke about his methods before Ethan takes Darcy in his arms.

Darcy and Ethan marry two years later in Holland Park in front of an audience of family and friends including Rachel, Dex, and their baby daughter. When Rachel stands to give a speech at the reception, Darcy is surprised and moved by her friend's words.

More summaries and resources for teaching or studying Something Blue.

Something Blue from BookRags. (c)2022 BookRags, Inc. All rights reserved.