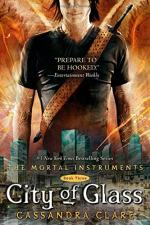 Cassandra Clare
This Study Guide consists of approximately 49 pages of chapter summaries, quotes, character analysis, themes, and more - everything you need to sharpen your knowledge of City of Glass.

This detailed literature summary also contains Quotes and a Free Quiz on City of Glass by Cassandra Clare.

City of Glass is the third novel in the Mortal Instruments Series by Cassandra Clare. In this novel, Clary travels to the City of Glass to find a magician who is said to have a cure for her mother’s self-induced coma. Also in the city are Clary’s friends, the Lightwoods, and her brother Jace. During their visit, the city, which had been thought impenetrable by demons, is attacked by a group of demons led by Clary’s father Valentine. Clary and Jace find themselves forced to face Valentine in a final battle that will leave one, or all of them, dead. City of Glass is a satisfying conclusion to the battle between evil and good that are personified in the characters of Valentine, Clary, and Jace.

Clary is planning to travel to Idris, the City of Glass that is the capital of the Shadowhunter world, Alicante. Clary has been told by Madeleine, a friend of her mother’s, that there is a magician named Fell there that has the spell that can reverse the coma Clary’s mother put herself into when Valentine showed up at their apartment. Unbeknownst to Clary, her brother Jace does not want her to go and is making plans to stop her.

As the Lightwood family and Jace make preparations to go to Alicante, Jace tries to convince Clary’s friend Simon to stop her from going. Simon argues; and, before a decision can be made, Forsaken warriors attack the family. Simon is injured, so Jace pulls him through the portal to Alicante. This is highly unusual, because Simon is a vampire. They are met with fury on the other side of the portal. Simon is eventually taken to the ruling class known as the Clave. Then, he is imprisoned on the accusation of being a spy for Valentine.

Clary, angry that the Lightwoods and Jace have traveled without her, uses her special skill of creating runes to make a new portal. Clary goes through the portal with her mother’s friend Luke. Clary falls into a lake that has long been cursed against Shadowhunters. Luke quickly takes Clary into Idris and to the home of his sister Amatis, so that he can heal her from the curse. Clary is then told to stay put since she has entered the city illegally, but Clary cannot resist the desire to confront her brother for leaving without her.

When Clary arrives at the home of the Penhallows, where the Lightwoods are staying, she meets Sebastian, a cousin of the Penhallows daughter. Clary feels an immediate connection to this young man who oddly resembles a character she once drew in a graphic novel. However, this connection is quickly forgotten when Clary goes to confront Jace and finds him in the arms of another girl. Clary and Jace were once lovers before learning of their biological connection and the feelings continue to confuse both of them. This situation does little to help the confusion.

Jace is angry with Clary for coming to Idris and quickly sends her away. Clary, however, is determined to do what she has come to do. For this reason, when Sebastian offers to take her to Ragnor Fell, she agrees. However, the visit proves fruitless when Clary discovers that Ragnor Fell was killed by Valentine hours before her arrival. However, another magician, Magnus Bane, tells Clary about a book that he believes contains the spell needed to wake her mother. Unfortunately, this book is hidden in the former of home of her father who is Valentine.

Clary is once again confronted by Jace. Clary tells Jace about the book, and together they go to retrieve it. While there, they stumble upon an angel that Valentine has kept prisoner in the home. The angel shows Clary some images before showing her how she can free him. The angel kills himself when Clary frees him.

Clary and Jace return to Idris only to find it in flames. A group of demons under Valentine’s command have somehow found a way into the city and are attacking. Many die during the attack, including the Lightwood’s former tutor. Afterward, Luke suggests an alliance with the Downworlders, the vampires, fairies, and werewolves, to help defeat Valentine. There is resistance to this idea until Clary tells everyone that she knows a rune that will combine pairs of Downworlders and Shadowhunters to help them fight together.

At the same time that Jace is fighting for his life, Clary realizes what Valentine plans to do/ She opens a portal to Lake Lyn. Valentine is there, using the Mortal Instruments to call forth the angel Raziel, the father of the Shadowhunters. Jace arrives before Valentine can complete the ritual. They fight, and Valentine kills Jace. As Valentine continues the ritual, Clary makes a change to one of the runes. Raziel arrives and argues with Valentine. Then Raziel announces that Clary’s name is the one that summoned him. He will only grant a wish from her. Raziel then kills Valentine and resurrects Jace at Clary’s request.

There is a celebration in Idris after Valentine’s death and the successful battle. Downworlder representatives are chosen to sit on the Clave council. Jocelyn and Luke finally commit to one another, and Clary and Jace make their own commitment to one another, now that they know they are not brother and sister.