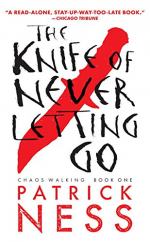 Patrick Ness
This Study Guide consists of approximately 50 pages of chapter summaries, quotes, character analysis, themes, and more - everything you need to sharpen your knowledge of The Knife of Never Letting Go.

This detailed literature summary also contains Quotes and a Free Quiz on The Knife of Never Letting Go by Patrick Ness.

"The Knife of Never Letting Go" by Patrick Ness, takes place in the unspecified future on a planet that is simply referred to as "the new world." The main character, Todd, gradually explains to readers the state of this new world. He lives in a small town, Prentisstown, where he’s the last boy. Everyone else in the small community is a man, which happens when they turn 13. All of the women were killed off by an alien race known as the Spackle. The Spackle released a genetic weapon on humankind, infecting them with something called the Noise germ.

The Noise germ gave all of the humans and animals the ability to mentally communicate with one another. Todd was told that the women were simply killed off by the virus. The book starts with Todd exploring the swamp, gathering apples for his adoptive parents, Ben and Cillian. Todd is accompanied by his dog, Manchee. While exploring the swamp, they find something that emanates pure silence, something that has been unheard of since the Noise virus was released.

When Todd returns home his Noise leaks the news about the silence. Ben and Cillian grimly pack supplies for Todd, explaining that they knew this day was going to come. Ben hands Todd a journal that was written by his mother, and a map that will take him somewhere new. He can’t go into more details, since otherwise it will be possible for the others to read his Noise.

Todd is forced to leave while the town descends on Ben and Cillian. While running from his town, Todd encounters the silence again. He finds out that it’s from a girl, Viola. Viola is being pursued by Aaron, a preacher from Prentisstown. Todd saves Viola and the two run away from Aaron. They follow the map which leads to another settlement, Farbranch.

Todd is shocked because everything he had been told is turning out to be a lie. He thought there were no other settlements, and he certainly thought there were no women alive. Farbranch is a mixed gender town, which looks down upon the people of Prentisstown. Todd doesn’t get the chance to find out why, as the Prentisstown army starts to march, led by Mayor Prentiss himself. Todd and Viola are forced to flee Farbranch, which is destroyed by the army.

Todd and Viola plan to travel to Haven, supposedly the first and largest settlement. Along the way they find other settlements and gradually begin to learn more details about what really happened. Viola reveals that she came from a scouting ship and that new settlers are looking to land on the planet. At other settlements, Todd learns that the men of Prentisstown are looked down upon as outlaws for starting a war with the Spackle and killing off all their women.

Todd and Viola are pursued not only by the army, but by Aaron. Aaron manages to catch up to them, but Manchee gives his life so they are able to escape. Todd begins to piece together what Aaron wants. Aaron believes that the men of Prentisstown are part of an army sent by God. When the boys become men, they are required to kill someone to prove that they are a strong and loyal soldier. Since Todd is the last boy, Aaron's sacrifice is supposed to be special. They learn that Aaron's death is supposed to be a blessing for the Prentisstown army to march and take over the planet, turning it into their new Eden.

Aaron ends up cornering Todd and Viola outside of Haven. Aaron tries to get Todd so enraged that he’ll kill him. Todd wants to, but Viola stops him, killing Aaron herself. They start to enter Haven, but Viola is shot right outside the entrance. Todd brings her into Haven, shouting for help. Mayor Prentiss reveals himself, telling Todd that he has already taken the city. The book ends with Todd surrendering to Prentiss, desperate for his assistance to save Viola.

More summaries and resources for teaching or studying The Knife of Never Letting Go.