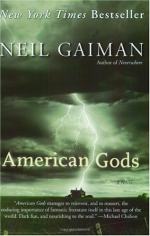 The gods, goddesses, and other mythical characters are very different from the traditional descriptions of them. How are these contrasts shown? How are these characters updated for the modern world? Is this effective? Why or why not?

Shadow uses coin tricks to keep himself occupied in prison. Several of the mythical figures he meets give him coins. Why does Shadow choose to believe they are doing tricks? Why are coin tricks so important to him? Could coins have an important significance in mythology? Discuss.

In several chapters, past times are described, notably those when people...