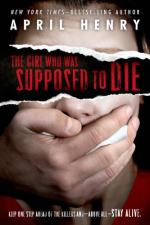 The Girl Who Was Supposed to Die Summary & Study Guide

April Henry
This Study Guide consists of approximately 59 pages of chapter summaries, quotes, character analysis, themes, and more - everything you need to sharpen your knowledge of The Girl Who Was Supposed to Die.

The Girl Who Was Supposed to Die Summary & Study Guide Description

The Girl Who Was Supposed to Die Summary & Study Guide includes comprehensive information and analysis to help you understand the book. This study guide contains the following sections:

This detailed literature summary also contains Quotes and a Free Quiz on The Girl Who Was Supposed to Die by April Henry.

A teenage girl wakes up with all of her memories gone and finds herself in a cabin with men who plan to kill her. She discovers that she is missing fingernails and she has taken quite a beating. While one of her captors decides to return to Portland, the other drags her out back to finish her off. The girl realizes that she knows karate, knocks her assailant out, takes his gun, wallet, and cell phone, and then gets into his car, escaping.

The girl goes straight to a security office and asks for help, but a man named, Nowell, who claims to be a doctor from Sagebrush, a mental hospital, calls the security officer and says the girl, named Katie, is paranoid and has hallucinations. The officer keeps Katie in his car, but she pulls a gun on him and escapes, driving away.

[The reader should note that at this point the protagonist is still known as "Katie" but that her name will change about mid-way through the novel. This will be pointed out in the guide as she switches to a new name for the rest of the story.]

Katie, believing that she is far enough away, risks stopping at a McDonald’s. It is here that she meets Ty. He gives her a free cup for water, and she eats her food while trying to figure out who she is and what has happened. Exhausted, she falls asleep and Ty wakes her up. Apologetic and embarrassed, she goes to use the restroom. While in there, she overhears the men who are chasing her talk to Ty. Ty says he hasn’t seen Katie. When the men leave, Ty helps her escape and stay at his place.

Katie meets James, Ty’s roommate, and the next day the same men are knocking on apartment doors trying to find her. She and Ty hide, and James gets the men to leave. The boys cut Katie’s hair to look like a boy, and she and Ty escape on skateboards. They go to the café and then the library and discover that the security officer that was killed, as well as the cabin Katie woke up in, was burned down with human remains discovered inside. At this point Katie takes on the name "Cady" for Cadence, and she is known from this point forward as Cady.

Ty and Cady steal a car from the gym, and they head to Portland, where Cady thinks there are answers. They hear a woman who claims to be Cady’s aunt speaking to the press, so they go to find her. The woman’s name is Elizabeth and Cady doesn’t recognize her, but Elizabeth seems to know her. She explains that Cady’s parents are microbiologists and they found a virus that causes people to drown in their own blood. She says they developed a vaccine that could be used for biological warfare, and they are trying to keep it from the owners of Z-Biotech for protection. Cady deduces that they are the men who are chasing her, and they most likely want her to tell them where her parents are so they can get the vaccines.

Elizabeth, Ty, and Cady go to Cady’s old house to try and find more clues. While there, Elizabeth reveals that she really isn’t Cady’s aunt. At this point one of the men that hurt Cady shows up. Cady learns that his name is Michael Brenner. Seeing the man causes Cady to gain all her memories back, and she remembers that Brenner had said that he killed her little brother, Max. She breaks his arm and she and Ty get possession of a gun and tie both Elizabeth and Michael up. She learns that Max is really alive and the human remains in the burned down cabin were not from a human, but were from a chimp. Cady figures out that her parents left her a message. She calls a special encoded number and leaves a message, and her mom calls her back. She explains that Max is sick and that Cady needs to get the vaccine from Z-Biotech.

She and Ty take Elizabeth’s keycard, dress as janitors, and sneak into the building at Z-Biotech. They tie up the security guard and go upstairs to get the vaccines. While there, they find the eggs that are growing the vaccines. They set them on fire and Cady takes the vaccine. Nowell shows up, and dumps what he thinks is the vaccine down the drain, but Cady really switches it with plain water. He finds out that the eggs are on fire, and he goes to open the place they are in. It creates a backdraft, and they all are burned. Firefighters show up and Ty explains what happened. Brenner, Nowell, and Elizabeth are all taken into custody without bail. Max gets the vaccine and is safe, and Cady’s mom explains to her while she is in the hospital that her dad will be fine after surgery, and that Ty is okay, too. The story ends with Ty and Cady enjoying a ski trip three months later, trying to settle in to the lives of normal teenagers. Cady’s parents are constructing a new cabin where the old one used to be, and the book finishes with Cady and Ty sharing a first kiss.

More summaries and resources for teaching or studying The Girl Who Was Supposed to Die.

The Girl Who Was Supposed to Die from BookRags. (c)2022 BookRags, Inc. All rights reserved.