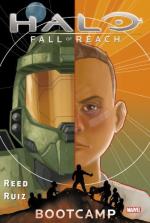 The Fall of Reach Summary & Study Guide includes comprehensive information and analysis to help you understand the book. This study guide contains the following sections:

This detailed literature summary also contains Topics for Discussion on The Fall of Reach by Eric Nylund.

The Fall of Reach is one of the novels in the Halo series by author Eric S. Nyland. The story follows the main character, John 117 as he is abducted from a school playground and turned into a Spartan or one of the elite fighting groups for the USNC. Humans having been fighting the Covenant, the aliens, for at least 10 years when the novel opens. Dr. Halsey is brought in for a secret operation to find potential children to use to form the experimental Spartan squad. She chooses the children and invents the augmentation process necessary to create the super soldiers.

As The Spartans train, the war rages on between the humans and the aliens the Covenant manages to take out colony after colony of humankind. This is putting the human race at risk of extinction. Throughout the years, the Spartans continue to train and to receive newly improved tools and armor to make them faster, more intuitive and more effective in defeating the Covenant.