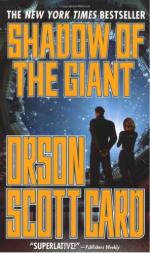 Orson Scott Card
This Study Guide consists of approximately 47 pages of chapter summaries, quotes, character analysis, themes, and more - everything you need to sharpen your knowledge of Shadow of the Giant.

Shadow of the Giant Summary & Study Guide includes comprehensive information and analysis to help you understand the book. This study guide contains the following sections:

This detailed literature summary also contains Topics for Discussion and a Free Quiz on Shadow of the Giant by Orson Scott Card.

Julian Delphiki (Bean) is the most gifted student to ever attend Battle School. As an elite member of Ender's Jeesh (military group), Bean stands out from the rest of the geniuses in Ender's Jeesh not only for his extraordinary brilliance, but also because he is physically different—genetically modified. As a child, he is the most brilliant, but also very small. His condition sentences him to an early death because he continues to grow throughout his life until his heart can't support his giantism. Death is expected somewhere around age 20. After Ender and his Jeesh win the war against the Buggers and save mankind, Bean marries his Jeesh-mate, Petra Arkanian and they live on earth. Even with the knowledge of Bean's prognosis, Petra wants his children and is expecting their first child. But it is not their only child. Another eight embryos have been stolen by the very man that created Bean. Bean fears his missing children will be exploited. When he finds the man responsible for stealing his children; the man activates a deadman's switch sending the surrogate mothers into hiding. With Bean's race against time, finding his children is a priority, but he and Petra are also needed to help bring peace to a world. The challenges that members of Ender's Jeesh find themselves pitted against one another as world leaders.

Han Tzu is the leader of China, and the Muslims have rallied around Alai who is named Caliph. In India, a Battle School graduate who was not part of Ender's Jeesh rises to power as the people accept her as a god. Her underlying drive to prove that she is superior to Ender's Jeesh drives her to take risks. The more she succeeds, the more she believes her own propaganda that she is a god. Han Tzu of China approaches her and asks her to marry him, but she turns her down. Though her country is not as powerful as China or the Muslim league, it has the largest population. She approaches Peter Wiggin, Ender Wiggin's older brother, who leads the movement of the Free People of Earth and offers herself in marriage to increase her power. But Peter sees it as an entanglement and turns her down. On the rebound, she goes to Caliph Alai and pressures him into marrying her. He falls in love with her, but her hunger for power and need to dominate comes between them. His advisers don't trust her and many hate her. She shows her disapproval of Alai's tactics in front of the others. In private he says not to do it again. It leads to a parting of ways as she decides to attack China, while Alai sees Peter Wiggin and the FPE as the force to be defeated.

By the time the lines are drawn, the members of Ender's Jeesh see that it is best for Peter Wiggin and the Free People of the Earth to unite the world. To make that happen, Petra takes Moscow; Han Tzu wipes out the Russian army with only a handful of casualties; Bean decoys the Turkish troops toward Armenia, and he also is credited with the plan that leads to Suriyawong's win in China against the invading Indian troops. No matter what aspect of the battle—Ender's Jeesh is responsible for victory. Yet, even after this, individual nations look to Jeesh members in their own countries as powerful tools to reach autonomous goals. One by one the members of Ender's Jeesh see that if the world is ever to experience real peace, they need to leave. Graff, the man who hand-picked and trained the members of Ender's Jeesh in Battle School, offers his former students the opportunity to leave earth and colonize the worlds formerly occupied by the buggers. Graff's plan is to disperse the human population so it is never threatened with extinction again. He sees that as long as Ender's Jeesh members stay on earth, there is no hope for world peace, for, though they all desire that peace, their ambition makes them want to be the one to bring it about. Individual nations look at these young people as the tool to make their country the foremost world power. Their departure brings balance, and the only member of Ender's Jeesh to stay on earth is Petra, who remarries after Bean is sent into space with those of his children who also are afflicted with his condition. She marries Peter Wiggin, who successfully ushers in world peace through the FPE.

More summaries and resources for teaching or studying Shadow of the Giant.

Shadow of the Giant from BookRags. (c)2022 BookRags, Inc. All rights reserved.