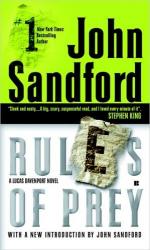 This detailed literature summary also contains Topics for Discussion and a Free Quiz on Rules of Prey by John Sandford.

"A rooftop billboard cast a flickering blue light through the studio windows. The light ricocheted off glass and stainless steel: an empty crystal bud vase rimed with dust, a pencil sharpener, a microwave oven, peanut-butter jars filled with drawing pencils, paintbrushes and crayons. An ashtray full of pennies and paper clips. Jars of Poster Paint, Knives." (Chapter 1, pg. 1). This is the seemingly innocuous opening of this thriller, Rules of Prey by John Sandford.

The maddog is a deranged killer with some of his victims being known as the Chosen. The serial killer is a lawyer who does extensive research on his victims and is a meticulous planner who pays attention to details. He has studied the case of other killers and bunglers learning what mistakes they made, trying to make sure he doesn't make the same mistakes which would lead to his capture. The killer has developed a list of rules which he follows and he leaves one as a note at each killing.

They are no hard and fast motives for the killings. The maddog, whose name is Louis Vullion, feels the urge to kill, so he kills. He used to torture and kill squirrels as a teen and found he derived sexual pleasure from the acts. The same was true of his first killing, a high school classmate who had offended him with a remark she made. He moves to the Twin Cities area after graduating law school, and the killings become more frequent.

Lucas Davenport is the police officer assigned to the case. He is a video game inventor, wealthy, unethical and illegal in many of his tactics. Both Davenport and Vullion come to view the situation in terms of a game and each tries to anticipate the other.

Sandford takes the reader into the mind of the killer. He is driven and can't control the urge to kill and the reader watches how he selects his subjects and performs his research and planning. Sandford also takes the reader through the steps of the police investigation and how they diligently track down clues and follow leads. The reader is there as Davenport begins to focus on Vullion and watches Vulliion squirm as he begins to realize he is under surveillance. The lawyer in him has him destroy all of the evidence, including that planted by Davenport; but it doesn't diminish his need to kill, which is eventually what did him in.

Rules of Prey is fast and exciting reading. The reader will not be able to put the book down once he begins the novel. It is fast and easy reading and is a book that will definitely hold the reader's interest.