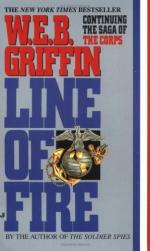 This detailed literature summary also contains Topics for Discussion and a Free Quiz on Line of Fire by W. E. B. Griffin.

Line of Fire, by W.E.B. Griffin, is one of the series of books in his continuing story of the United States Marines Corps. In this book, he looks at the lives and activities of a variety of characters during the early years of the war in the Pacific. Line of Fire is the fifth book of the series.

In this exciting story, two Marines, Joe Howard and Steven Koffler, are trapped on Baku Island at a Coastwatchers station called Ferdinand Six. They volunteered for a mission to parachute in with a radio since the Coastwatchers are a vital part of the war effort in the Pacific. They will report on Japanese troops, naval and air activity which will be relayed to American troops stationed on other islands in the area. In this way, they have advance knowledge of attacks. Koffler and Howard are in a precarious position because there are no supply deliveries to the island. They live off the supplies they can steal from the Japanese. There is no medical care and their radio is wearing out.

Koffler and Howard have basically been written off by the Coastwatchers organization who feel that it is impossible to deliver supplies to them or to rescue them. However, Brigadier General Fleming Pickering, who is instrumental in the operation that puts the men on the island, is not in agreement. He feels that a Marine never abandons another Marine and refuses to accept the fact that there is no way to rescue Koffler and Howard and send in supplies and a rescue team.

Pickering has Lieutenant Ken "Killer" McCoy formulate a rescue plan. The plan is so dangerous that most people who learn about it consider it to be suicidal, but Pickering, McCoy and their team think they can pull it off. Their team of volunteers is well trained for this operation and flexible enough to adapt to the changes they have to make along the way.

Line of Fire is full of excitement, intrigue and adventure as it follows the actions of the various characters. There is Pick Pickering, the son of Fleming, who is a Naval pilot. He is a brash dare-devil until his friend and fellow pilot, Dick Stecker, is seriously injured while landing a plane at Henderson Field on Guadalcanal. Then he is afraid to fly, but he is part of the rescue operation. Charley Galloway, an experienced pilot, deals with him and the operation continues.

The book is written in the same style as the other books in the series and has all of the characteristics of other W.E.B. Griffin novels. The novel is rather quick reading and the reader will enjoy the book and find it worth the time.