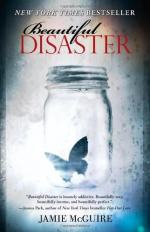 Jamie McGuire
This Study Guide consists of approximately 60 pages of chapter summaries, quotes, character analysis, themes, and more - everything you need to sharpen your knowledge of Beautiful Disaster.

Beautiful Disaster by Jamie McGuire is a romantic novel about Abby and Travis, two young people who fall in love against all odds. After meeting, Abby and Travis quickly become friends. However, he doesn’t believe in relationships, and she just wants to escape the past. Neither plan to fall in love. When they do, they must learn to overcome their fears because they know that they belong together. “Beautiful Disaster” is an inspiring love story about a couple with troubled pasts learning to trust and rely on one another in order to build a future together.

As Beautiful Disaster begins, Abby accompanies America and Shepley to a Circle fight where she meets Travis. Travis is immediately interested in becoming friends because he is intrigued by Abby. She is the only female who does not want to date him. Though Abby is repelled by Travis’s reputation, she befriends him and quickly learns that many of her beliefs about him are wrong. As their friendship develops, the attraction between them is obvious, despite their attempts to disprove any romantic connection. Abby tries to pull away from Travis when their friendship begins to impact her reputation, but he will not allow it. Travis is furious when Abby begins dating Parker, one of his frat brothers, and he soon makes a bet with Abby that he will not take a hit during one of his fights, the end result being that Abby loses and has to spend a month at Travis’s apartment.

When Travis overhears Abby telling America her reasons for not dating him, he is hurt and sleeps with two girls that night. He does this in spite of his insistence that he and Abby are just friends. Travis makes Abby’s experience dating Parker unpleasant by continually calling her during dates and mocking Parker until she tells him not to ruin this for her. Though Parker questions Travis and Abby’s friendship, Travis refuses to release Abby from the bet, admitting that he cannot stand the thought of her being with Parker. After the surprise birthday party Travis throws for Abby, during which she makes out with Parker, rumors abound that Abby slept with both Parker and Travis, and America tells Abby that the rumors that she is two-timing both guys are going around because they are true!

Travis throttles a guy who insults Abby, but Abby explains to her friend, Finch, that she cannot date Travis because he reminds her too much of her father and the past that she is desperately trying to escape. Parker decides to stop seeing Abby until her month with Travis ends; but, on the last night, Abby has sex with Travis. Travis is distraught when she leaves during the night and starts dating Parker again; however, Abby’s feelings for Parker are completely eclipsed by her emotions for Travis, so when Travis admits that he is in love with her, she stops seeing Parker and becomes Travis’s girlfriend. Abby and Travis fight over Travis’s jealousy, but he promises to do better because he wants her to be happy.

During poker night with Travis’s family, Travis learns about Abby’s past and her father, but he promises her that it is not important. When Mick visits Abby for help escaping from his debt, Abby and her friends fly to Las Vegas where Abby wins most of the money to repay Mick’s debt. Travis engages in a professional fight for Benny to make up the remaining difference. Unfortunately, Benny wants Travis to continue fighting for him. Since Travis will not heed Abby’s objections, she breaks up with him because she is convinced that he thinks money is more important than she is.

However, even after breaking up with Travis, Abby accompanies him to his family’s Thanksgiving celebration, pretending they are still in a relationship. She is on the verge of reconciling with Travis when he notes that he is happy as long as she is happy. So, she does not tell him that she has changed her mind about breaking up. Abby suffers for a rough couple of months, catching Travis with Megan and a box of condoms. She goes with Travis to a fight where she is nearly sexually assaulted because Travis wanted to break up her dinner with Parker to prove that she belongs to him. When Travis drags a drunken Abby out of a frat party to prevent her from acting foolish, he declares his love for her, and they finally make up.

During the last Circle fight of the year, Keaton Hall burns down, and Abby and Travis narrowly escape. This event forces Abby to realize that she and Travis belong together, so she proposes to him. They visit Las Vegas again to get married. After Abby gets a tattoo of her married name, she calms Travis’s fears by assuring him of her everlasting love and devotion.

More summaries and resources for teaching or studying Beautiful Disaster.