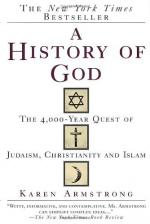 Karen Armstrong
This set of Lesson Plans consists of approximately 136 pages of tests, essay questions, lessons, and other teaching materials.

This quiz consists of 5 multiple choice and 5 short answer questions through Chapter Abstracts.

4. Western secularism and the rising dominance of industrialized European countries had a profound effect on ____________.
(a) The Muslim religion.
(b) The environment.
(c) Americans.
(d) Politics.

1. The development of conflicting philosophies of the nature and existence of God took place against the backdrop of ____________.

2. Paradoxically, Armstrong identifies strong movements in all three religions to ____________.

3. What did Nietzsche teach about the Christian God?

4. What question is asked but not answered at the end of this book?

5. Now Europe split into two warring armies. Who were these warring groups?

More summaries and resources for teaching or studying A History of God: The 4000-year Quest of Judaism, Christianity, and Islam.

A History of God: The 4000-year Quest of Judaism, Christianity, and Islam from BookRags. (c)2021 BookRags, Inc. All rights reserved.