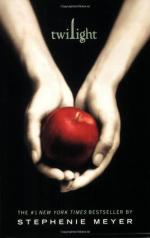 Stephenie Meyer
This Study Guide consists of approximately 37 pages of chapter summaries, quotes, character analysis, themes, and more - everything you need to sharpen your knowledge of Twilight.

This detailed literature summary also contains Topics for Discussion and a Free Quiz on Twilight by Stephenie Meyer.

This young adult vampire novel takes place mostly in a town on the Olympia peninsula in Washington state. The town's name is Forks, and it is one of the rainiest, cloudiest towns in the United States, with only a few days of sunshine during the entire year. The main character, Isabella Swan, commonly known as Bella, is moving to Forks to live with her father, Charlie Swan, who is the chief of police. Bella is making this move because her mother is newly married to a baseball player who must travel, so rather than hold her mother back, Bella goes to live with her father.

Bella registers in high school and begins classes. She is surprised that people seem to already know her, and that some boys seem very interested in her from the beginning. She sees a handsome boy that seems to keep himself and his siblings. Bella is intensely attracted to this boy, named Edward Cullen, and is shocked when he seems to loathe her. Soon she learns that he is extremely attracted to her, but he feels he is dangerous to her. After being warned by an American Indian boy that the Cullens are Cold Ones, or vampires, Bella learns that it is true.

Bella is not frightened by the fact that her true love is a vampire. She meets the family and they almost all get along. However, during a family baseball game, a dangerous vampire family hears the game going on and finds Bella, a human, among the group. The vampires know by extrasensory perception that he is a hunter and that he is going to hunt Bella. Together they design a plan to keep Bella safe, and through an adventurous twist and turn of affairs, she is safe at last.

More summaries and resources for teaching or studying Twilight.