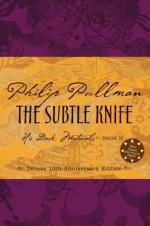 Philip Pullman
This Study Guide consists of approximately 45 pages of chapter summaries, quotes, character analysis, themes, and more - everything you need to sharpen your knowledge of The Subtle Knife.

This detailed literature summary also contains Topics for Discussion and a Free Quiz on The Subtle Knife by Philip Pullman.

The Subtle Knife is the second book in the three-volume His Dark Materials series and continues the story of the conflict between the Authority, personified by the Church, that demands humility and submission from all creatures and those who rebel against the Authority's control. This book introduces the character of Will Parry, a twelve-year-old boy who stumbles into another world by accident. Will joins Lyra, the protagonist from the first book in the trilogy, and even though they have different goals and objectives at first, they discover that they are both an integral part of the same battle.

The book begins with Will Parry's efforts to keep his vulnerable and mentally unstable mother safe from two men who repeatedly harass them, demanding information about Will's vanished father, artic explorer John Parry. In trying to flee the thieves after he finds his father's letters, Will accidentally causes the death of one of the thieves. Will finds refuge in another world and meets Lyra who is searching for answers about Dust, a material that may be the cause of human consciousness.

The witch Serafina Pekkala, Lyra's rescuer from a cruel experiment designed to separate children from their daemons, is looking for Lyra. Serafina knew Lyra from adventures in the company of the bear-king Iorek Byrnison. Lee Scoresby, the Texas aeronaut, is also looking for Lyra so he can protect her from the harm that so many mean to do the young girl.

Will and Lyra have stumbled into Cittàgazze, populated only by roving bands of children, two of whom have a secret about the Torre degli Angelica, the four-story tower in the middle of the town. Lyra shows Will her alethiometer, a compass-like device that is always truthful. The pair returns to Oxford, Lyra to search for a scholar who can answer her questions about Dust, and Will to find out information about his father. In Oxford, Sir Charles, an older, obviously important and influential man, spots Lyra in a museum reading the alethiometer. He tries to strike up a conversation, but Lyra is evasive and goes on to find Dr. Mary Malone, a scientist who is working with what she calls Shadows.

Will and Lyra go back to Oxford and Sir Charles steals the alethiometer. He will only give it back in return for a knife in Cittàgazze. Will and Lyra return to Cittàgazze where they must fight for the knife, which has been stolen from its true guardian by the older brother of some of the children. Will loses two fingers of his left hand in the fight.

Will and Lyra steal the alethiometer back, from Sir Charles—no small feat considering Sir Charles is being visited by Mrs. Coulter and Lyra finally recognizes him as Lord Boreal from her world. He has known who she was all along.

Lee Scoresby finds Grumman and makes him promise to protect Lyra. Back in Oxford, Dr. Mary Malone quits the project, contacts the Shadows, destroys the experiment's equipment, and enters the world of Cittàgazze.

Lee and Grumman are perused by Church soldiers, and they crash-land in a gulch. Grumman does what he can with his magic to kill the soldiers, but there's one zeppelin left and Grumman is not well. Lee decides to stay and hold off the soldiers while Grumman goes on to make contact with the bearer of the knife, on the condition that the knife protects Lyra. Grumman is able to leave, but Lee and his daemon Hester are killed.

In the final chapter, Mrs. Coulter finds out why Lyra is important: the girl is to be the new Eve, and Mrs. Coulter knows her own daughter must die to keep mankind from falling. She kills Sir Charles/Lord Boreal, and sends the Specters under her control to attack Will and Lyra. Will and Grumman come face to face andGrumman tells Will everything he needs to know about the knife, and about his own destiny, and urges him to join Lord Asriel. They realize they are father and son, but have only a moment before Grumman is killed by a witch. Will goes back to Lyra, but finds her witch guards have been destroyed by Specters and that Lyra is gone. Two angels appear and urge Will to go to Lord Asriel immediately. Will is left at a point where he must make a decision.

More summaries and resources for teaching or studying The Subtle Knife.