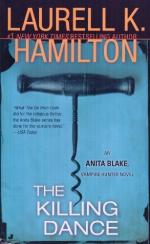 Laurell K. Hamilton
This Study Guide consists of approximately 50 pages of chapter summaries, quotes, character analysis, themes, and more - everything you need to sharpen your knowledge of The Killing Dance.

This detailed literature summary also contains Topics for Discussion and a Free Quiz on The Killing Dance by Laurell K. Hamilton.

The Killing Dance by Laurell K. Hamilton is the fifth book in a series about necromancer Anita Blake. Anita is plagued by attempts to kill her after a contract is placed on her life. As her powers grow and evolve, Anita learns the reason that someone wants her dead so badly. The Killing Dance presents a major turning point in Anita Blake's life.

Sabin and Dominic Dumare seek Anita's help curing Sabin's degenerative disease. During Catherine's dinner, Edward calls to tell Anita that he has been offered a contract to kill her, but he has decided to protect her instead. She and Richard return to her apartment where Richard helps her neighbor, Mrs. Pringle, carry her television upstairs. Custard, Mrs. Pringle's dog, whines at Anita's door. With Richard and Mrs. Pringle in the other apartment, Anita kneels and opens her door. A shot fires over her head, and she kills the intruder. Richard picks Anita up from the police station and invites her to stay in his guest room. Stephen calls Richard because Raina is trying to force him to participate in her pornographic films. While Richard fights Sebastian and Jamil, Anita rescues Stephen. Anita wakes at dawn to voices outside her bedroom and argues with Richard. During the lycanthrope meeting, Richard introduces Anita as his lupa. Neal challenges and attacks Anita, but she wins by throwing him through the window. Edward arrives, and he and Anita plan to keep her alive.

During Jean-Claude's date with Anita, Sabin threatens Anita and Cassandra at the club. When Damian bespells a woman, Karen, Anita stops him, and she, Cassandra, and Annabelle, a stranger, take Karen to the bathroom. Raina enters the bathroom and, with Cassandra, escorts Annabelle to a cab. Annabelle attempts to shoot Anita, but Anita manages to stab Annabelle first. Anita is questioned in Jean-Claude's office until Dolph takes her to another crime scene. There, Anita discovers Robert's body in a necromancy circle, but she is unable to enter the circle because she did not create it. Edward takes Anita to the Circus of the Damned to hide out while he gets additional back-up. Later, Anita, Jean-Claude and Richard form a triumvirate to secure their power bases. With the power, Anita raises zombies and three vampires. Dominic Dumare assists her in laying the vampires back to rest. Edward arrives with Harley, his back-up. At the lupanar, Richard kills Marcus and Anita shoots Sebastian. Richard shape shifts on top of Anita, causing her to run into Jean-Claude's arms and bed. The next morning, Richard dumps Anita. After Cassandra knocks Anita out, Anita wakes in the barn with Gabriel and Raina. Cassandra is Sabin's wolf, and Dominic needs to kill Jean-Claude and Richard to restore Sabin's health. Anita convinces Gabriel to give her a knife and act out his fantasy of raping her while she tries to kill him. During this, Jean-Claude marks Anita as his human servant. After Anita kills Gabriel and Raina, Edward and Harley join her to rescue Jean-Claude and Richard. They kill Cassandra, Dominic Dumare, and Sabin. Anita, unwilling to lose both, allows Jean-Claude to give her the third mark to prevent the men's deaths. She wakes in the hospital to learn Jean-Claude and Richard are both alive, though Richard will not talk to Anita, making their triumvirate useless.

More summaries and resources for teaching or studying The Killing Dance.