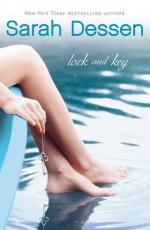 Sarah Dessen
This Study Guide consists of approximately 39 pages of chapter summaries, quotes, character analysis, themes, and more - everything you need to sharpen your knowledge of Lock and Key.

This detailed literature summary also contains Topics for Discussion and a Free Quiz on Lock and Key by Sarah Dessen.

When Ruby is five, her father leaves and her mother, suffering from alcoholism, a lack of self-esteem, and abandonment issues, begins a series of dead-end jobs, erratic moves, and abuse. Ruby's sister Cora stands between Ruby and her mother, literally, for the next two years until Cora turns eighteen and goes away to college. She initially calls but the girls soon lose touch. A series of erratic moves and a number of sub-standard rent houses along with her mother's abusive behavior becomes the core of Ruby's life for the next years. Then, just six months short of her eighteenth birthday, Ruby's mother disappears. She holds her life together for a short time but her landlord discovers that her mother is missing and child services steps in, sending Ruby to live with Cora and her husband, dot-com millionaire Jamie Hunter.

Jamie grew up with the idyllic life of a close-knit family and traditional holidays and he wants to share that with Cora and Ruby. Ruby however knows that it is best not to trust anyone other than herself and decides to run away as soon as Jamie and Cora have gone to bed the first night. She makes it as far as the back fence and is in the process of trying to hop over when the family's dog, Roscoe, alerts everyone to her plan. On the opposite side of the fence, Ruby encounters a boy about her own age. Nate is handsome, smart, and popular and becomes Ruby's ride to school. Ruby pledges that she'll keep her distance but soon finds herself indebted to Nate, then to a fellow student named Olivia, and then to a child prodigy named Gervais. As she learns to accept friendship, she discovers that others also feel the need to remain aloof. While she understands it in others because she deals with it herself, the situation becomes impossible when Ruby discovers that Nate is being physically and verbally abused by his father.

Meanwhile, Ruby learns that Cora also harbors some scars from their shared childhood. Cora had tried to keep in touch but their mother had insisted that Ruby didn't want to talk to Cora. She'd believed Ruby chose not to attend her wedding, only discovering that Ruby believes she hadn't been invited when the two begin comparing notes. When Ruby slips back into her old habits of drugs and alcohol, Jamie is disappointed in Ruby's decisions but Cora understands and reaches out. Ruby, not sure if it's the right thing, goes on instinct and takes Cora's proffered hand, healing the bond between the two.

With a nice home, Nate safely away from his father, and a bond with Cora and Jamie, Ruby graduates high school, learns that her mother is in a rehab clinic, and sets out for the next stage of her life - a college degree she hadn't even dared dream about until Cora and Jamie stepped in.

More summaries and resources for teaching or studying Lock and Key.