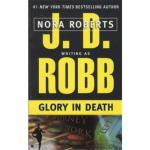 This detailed literature summary also contains Topics for Discussion and a Free Quiz on Glory in Death by Nora Roberts.

Glory In Death by J.D. Robb is a romantic spin on the tale of a tough-as-nails lady detective, with a soft side. In this romantic suspense tale, Lieutenant Eve Dallas is a futuristic New York City police detective with a penchant for stalking down the worst of society in the year 2058. In this follow up to book one in the series, Eve must learn to follow her gut, and her heart.

Prosecuting Attorney Cecily Towers is found brutally murdered on a rainy night in futuristic New York City, and Police Lieutenant Eve Dallas is assigned as Primary Detective to the case. Eve follows a haphazard trail of leads, and when actress Yvonne Metcalf is killed in the same style, Eve finds herself chasing down a double murderer.

Frustrated, Eve decides to use her media contact, Nadine Furst, to gain publicity, and sets herself up as bait to catch the elusive killer. Eve's plan backfires when the killer stalks Nadine. When Nadine loans her assistant, Louise Kirski, her raincoat and sends her on an errand, the killer mistakes Louise for Nadine, and kills her, leaving her to die in front of the news station. Minutes later, C.J. Morse, a reporter Eve despises for his sleazy tactics, stumbles upon Louise's body.

As Eve reviews video surveillance of the murder, she sees the vehicle of the first victim's son, David Angelini, at the scene. Sure she has the killer in her sights, Eve takes him into custody. Upon learning this, his father, Marco Angelini, falsely confesses to the crime. Eve knows the man is lying, and decides to hold David in custody, hoping he will crack under the strain of being jailed.

Exhausting all other options, Eve decides to speak to Dr. Mira, her psychiatrist, about David Angelini, to see if he fits the profile of a cold-blooded killer. Dr. Mira bursts Eve's bubble when she informs her that he doesn't, and that the killer is another sort of man completely. Dr. Mira tries to steer the conversation to Eve's personal life, and much to Eve's relief they are interrupted by a call from Feeney, a cop that is assisting Eve on the case. Feeney tells Eve that the new Police Chief, Captain Tibble, wants her in his office immediately.

Eve arrives at Harrison Tibble's office to find him in less than a good mood. He informs Eve that she has no case against David Angelini, and Eve is forced to release David, whom she is certain is guilty.

Dejected, Eve decides that the best course of action is to start at the beginning, and retrace the steps of the first victim. While on the street, she happens upon a junkie that claims to have seen the killer, and his car. Realizing she needs to have Nadine Furst broadcast this new lead, Eve hurries to Channel 75. When she gets there, she is informed by C.J. that Nadine has taken a much-needed respite from work, to try and come to terms with Louise's death. He offers to cover the story for Eve, who gives him a few choice words, and a refusal.

While at a function that evening, Eve is replaying the investigation in her head, and recalls C.J. telling her that he will never forget Louise's eyes when he found her body. Remembering that Louise's eyes were closed when she got to the scene, Eve strongly suspects that C.J. is the killer, and everything falls into place. Ordering a citywide search for C.J., Eve begins hunting him down. Soon enough, she receives a call from C.J. informing her that he has Nadine, and that he is going to kill her unless Eve meets him immediately. Eve rushes to the park where C.J. is holding Nadine captive, to discover that he is broadcasting the crisis. As C.J. rants and raves, Eve pulls her weapon, forcing him to release Nadine. C.J. flings Nadine toward Eve, and flees. Eve orders Nadine to run for help, and pushes her away from the scene. Eve hears a noise in the bushes, and suddenly hears a scream. Suddenly she is C.J.'s hostage, as he holds his knife to her throat. The two begin to struggle, with C.J. quickly gaining the upper hand. Just as C.J. is about to kill Eve, she hears a primal scream, and Roarke, her boyfriend, charges C.J., bringing him to the ground. The two men struggle, and Roarke stabs C.J. in the throat.

Badly shaken, Eve still manages to hold it together long enough to find Nadine, and make sure she is alright. Only then does she let herself collapse into Roarke's arms. Realizing what Eve means to him, Roarke asks Eve to marry him. Eve is shocked, and stammers in disbelief as the two leave the scene, wrapped in each other's arms.