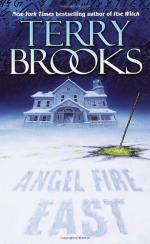 Terry Brooks
This Study Guide consists of approximately 54 pages of chapter summaries, quotes, character analysis, themes, and more - everything you need to sharpen your knowledge of Angel Fire East.

"Angel Fire East" by Terry Brooks is an intriguing novel in the Word and the Void series about the battle between good and evil in the world. After locating and capture the mysterious gypsy morph that is capable of aiding either side in the battle between the Word and the Void, John Ross travels to Hopewell, IL to ask for Nest Freemark's help to protect the morph and learn its purpose. The two battle several demons with the use of their own magic to protect the morph and try to discover its secret. "Angel Fire East" is an extremely entertaining and interesting novel about the challenges Nest and John Ross face as they search for the answer to the riddle of the gypsy morph.

During a dream, John Ross has a vision of himself being crucified in the future and he is sent on a quest to find and protect the mysterious gypsy morph. Findo Gask appears on Nest Freemark's doorstep in Hopewell, insisting that she does not aid Ross and the morph when they appear and Nest angrily refuses to agree to any of Gask's demands. While Nest attends church, Penny Dreadful, Gask's demon assistant, learns of Larry Spence's infatuation with Nest, and Gask plans to use Larry to achieve his desires. Returning home after surveying Sinnissippi Park with Pick, the sylvan who maintains the balance of magic in the park, Nest finds Bennett Scott, a childhood friend, and her daughter, Harper, waiting on her porch. Bennett tells Nest about her history as a drug addict, and when she admits that she has returned to Hopewell hoping Nest will help her, Nest invites Bennett and Harper to stay with her as long as necessary. After a Christmas caroling adventure during which Twitch, another of Gask's demons, attacks Nest's church group, Nest returns home, and late that night, John Ross arrives at her house with the gypsy morph which has taken the form of a little boy whom John calls Little John. He has come to Nest because the morph spoke one word, Nest, after taking his current form.

As Bennett takes a walk in the park with Harper, Penny approaches her and offers her drugs, but Bennett's indecision is saved by the appears of Two Bears who speaks to Nest about his intention to rejoin his ancestors and suggests she try talking to the gypsy morph to ascertain why it spoke her name. When Nest takes Harper and Little John tobogganing at the park, Gask uses magic to open a hole in the ice, but luckily Pick warns Nest, and she manages to save herself and the children from the danger. Upset about the night's events, Bennett takes a walk and runs into Penny who persuades her to indulge in her addiction, and Bennett does not return to Nest's during the night. The next day, Nest encounters Two Bears again who again encourages her attempts to talk to the gypsy morph, and when the demons pursue Two Bears after Nest leaves him, Two Bears disappears in a whirlwind of snow. That evening, Nest and her houseguests attend a Christmas party at her friends' house. Bennett slips away, leaving a note in Nest's pocket, and meets Penny at Nest's house. After supplying Bennett with an excessive amount of drugs, Penny and Gask lead Bennett to Sinnissippi Park where they trick her into jumping off the cliff. Realizing Bennett is missing, Nest returns home with the children where they are attacked by the ur'doch, but Wraith releases from Nest's body to defend them. Little John, seeing Wraith across the room, clings to Nest and calls her mama, but he is visibly upset when Wraith returns to her body.

On Christmas Eve, the police find Bennett's body and Nest offers to raise Harper as her own daughter. With the help of Larry, who is being influenced by Gask, the demons kidnap Harper and Little John, offering to trade them in exchange for the gypsy morph because they do not realize that Little John is the gypsy morph. Nest and John Ross plan a preemptive strike. Nest sends Wraith into the park to find Pick to help scout the demons' house, but Wraith's connection to Nest is severed. After Pick determines that the children are guarded by the ur'doch in the basement, he leads Nest into the house while John attacks the demons from the front upstairs. Wraith arrives at the demons' house to fight the ur'doch, and the ur'doch dies when Nest turns the light on. Ross kills Penny and Twitch, but he is mortally poisoned by Penny's dagger which is coated with demon poison. Gask confronts Nest in the backyard, but when Nest tells Gask that the gypsy morph is gone, he leaves her along because she no longer has anything he wants. Before leaving the basement, the morph had told Nest what it wanted, and when she agreed, it became a child in her womb. After Nest leaves, Ross crawls to the park, and as he looks at the river, the Lady arrives and calls him home, causing him to drop his staff. Two Bears appears, retrieves Ross' staff and stares across the river, contemplating the continuous struggle between the Word and the Void.