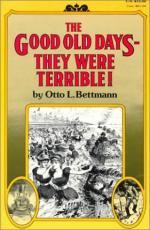 Otto Bettmann
This set of Lesson Plans consists of approximately 117 pages of tests, essay questions, lessons, and other teaching materials.

Air pollution was poorly understood in the time after the Civil War. Discuss what some popular misconceptions were about air pollution, and contrast those with the realities and dangers of air pollution.

Large cities (like New York) were inundated with trash in the late 1800s. Why was there so much trash in public places? What weather factors exacerbated the problem of the rotting trash and putrid stench? Particularly, how were the poor affected by these circumstances?

Traffic was a huge problem in the large American city in the late 19th century. Discuss some of the ways that cities tried to help the situation, and whether those solutions helped or hurt the traffic problem. Cite examples from the book.

Discuss the addition of the railways to the American cities in the late 1800s. How did the railways hurt or help the...

More summaries and resources for teaching or studying The Good Old Days--they Were Terrible!.