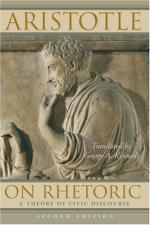 Aristotle
This set of Lesson Plans consists of approximately 144 pages of tests, essay questions, lessons, and other teaching materials.

1. In the beginning of the book, which one of the following did Aristotle indicate about rhetoric?

2. What was another word used for "legal" in Aristotle's discussion of legal rhetoric?

3. What did Aristotle think a political orator should be aware of?

4. As explained by Aristotle in Book I, Chapter 10, what was the concern of the legal rhetorician?

5. Based on Aristotle's explanation, what was the difference between envy and emulation?

1. What differences between a rhetorician and a dialectician were mentioned by Aristotle?

2. Why would rhetoric be used to help define individual beliefs?

3. What were some of the aspects of anger and calmness that Aristotle discussed in the book?

4. What was considered pleasant and unpleasant for the forensic speaker?

5. How were friendship and enmity described by Aristotle?

7. How was the emotional appeal defined by Aristotle?

8. Besides war and peace and national defense, what other subjects of political oratory did Aristotle include in Book 1, Chapter 4?

9. How was justice described by Aristotle and why was virtue a significant part of rhetoric?

10. How did Aristotle explain the good and the useful in terms of political rhetoric?

Explain the three stages of a lifetime that Aristotle outlined, the connection between a person's age and circumstances, the examples that Aristotle gave to support his views, and the reasons why he might have had those views about age and life. Provide your own examples in your analysis of which points you agree and/or disagree with Aristotle about his opinions on the stages in a person's life.

Besides sound argumentation, Aristotle thought that prose was very effective in rhetoric and speeches.

1) Describe the connection between prose and poetry and how prose was mainly used in rhetoric.

2) Explain the reasons why prose could be used in rhetoric, which audiences Aristotle thought would respond to it, and why.

3) Analyze the four common mistakes made in prose, examples of each mistake, and ways to avoid them.

More summaries and resources for teaching or studying On Rhetoric: A Theory of Civic Discourse.

On Rhetoric: A Theory of Civic Discourse from BookRags. (c)2022 BookRags, Inc. All rights reserved.