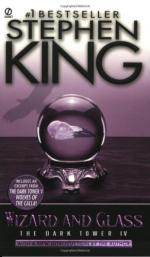 Stephen King
This Study Guide consists of approximately 40 pages of chapter summaries, quotes, character analysis, themes, and more - everything you need to sharpen your knowledge of Wizard and Glass.

This detailed literature summary also contains Topics for Discussion and a Free Quiz on Wizard and Glass by Stephen King.

WIZARD AND GLASS is a fiction novel, the fourth in Stephen King's Dark Towers series that tells the tale of Roland Deschain's quest for the Dark Tower. Roland Deschain, Eddie and Susannah Dean, Jake Chambers, and Oy the billy-bumbler have escaped the ruined city of Lud on Blaine the Mono. Unfortunately, Blaine is planning to derail himself at the end of the line in Topeka. Roland challenges him to a riddling contest, and if they win, they get to keep their lives. Eddie keeps asking silly, nonsensical riddles until Blaine's circuits are fried and his power gives out. The gunslingers arrive in Topeka, Kansas but find it deserted. They realize this world is similar but different from their own. Roland tells his friends a story of his youth after he became a gunslinger. He travels with his friends Cuthbert Allgood and Alain Johns to Hambry, a town in the Barony of the Mejis. They discover the mayor and ranchers of the town are working with the rebel John Farson, as well as three men known as the Big Coffin Hunters. Roland also meets Susan Delgado, a teenage girl who is supposed to become the Mayor's gilly or concubine. However, she and Roland fall in love, making him neglect his duties and frustrating his friends. Eventually, Roland comes to his senses.

Roland, Cuthbert and Alain are framed for the death of the mayor, but Susan helps free them from prison. They split up and Roland, Cuthbert and Alain manage to kill the traitorous men and two of the Big Coffin Hunters. They trap Farson's men in a canyon with a thinny, a portal to other worlds, and block off their escape. However, Susan has been captured by the townspeople and her aunt Cordelia, who believe Susan to be a whore and a traitor. They tie her up during the Reaping Day festivities and set her on fire. Roland sees this in a glass orb called the Wizard's Glass and learns he will have to give up the people he loves to ensure the Dark Tower doesn't fall. Roland finishes his story, and he, Eddie and Susannah Dean, Jake Chambers, and Oy continue onward. They find pairs of ruby shoes, which let them gain entry to the Emerald Castle. They confront Walter, who disappears, leaving the Wizard's Glass behind. Roland shows his friends how he accidentally killed his mother, Gabrielle Deschain, when he was younger. His friends vow to stick by him, no matter what the cost. They leave the castle and continue on their quest for the Dark Tower.

More summaries and resources for teaching or studying Wizard and Glass.