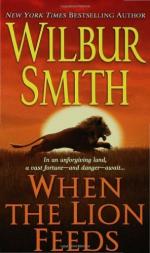 Wilbur Smith
This Study Guide consists of approximately 85 pages of chapter summaries, quotes, character analysis, themes, and more - everything you need to sharpen your knowledge of When the Lion Feeds.

When the Lion Feeds Summary & Study Guide includes comprehensive information and analysis to help you understand the book. This study guide contains the following sections:

This detailed literature summary also contains Topics for Discussion and a Free Quiz on When the Lion Feeds by Wilbur Smith.

When the Lion Feeds by Wilbur Smith is a gripping saga beginning with the introduction of twin brothers in Natal in the 1870's. Sean and Garrick Courtney are as close as two brothers can be, and as different at the same time. Bonded from birth, their lives intertwine. Sean is the dominant brother—his father's favorite, and Garrick is mostly content to follow in his shadow. It is this dynamic that orchestrates the hunting accident leaving Garrick without a leg, and Sean responsible. With considerable guilt, Sean is easily manipulated, and Garrick uses this to his advantage regularly. Sean becomes his protector, his confidante, his get-out-of-work-free card, and his safety net until war changes everything.

When they are separated by assignments in battle, Garrick is left without his brother's helping hand for the first time, and inadvertently rises to the occasion. When set upon by Zulu tribesman outnumbering them greatly, Garrick stumbles, jamming his arm through the door locks just as the Zulus are breaking in, saving the lives of most. The pain is so severe when the compound fractures occur that in shock he does not remove it and the Zulus continue to try to break in. Garry is a hero. It is an event that will change the course of his life. With Waite Courtney's death in battle, fate takes a turn. Garrick believes Sean is dead also, and he resents the great wealth he now has, happy to give it all up to have Sean back. Feeling as though there is little to live for, he welcomes a visit from Sean's girlfriend, Anna. When she tells Garry that she carries Sean's child, he rises to the occasion and proposes. Anna, seeking relief from constant poverty and a father for her baby, accepts and while they honeymoon, Sean returns to Theunis Krall. Anna's true feelings come to the surface in a shocking accusation that sets brother against brother and sends Sean on a journey of self growth and discovery.

Garrick discovers the courage he can tap from alcohol, and covers his feelings of social ineptness by dulling them with alcohol. When the great cattle disease strikes he loses half the stock and has to take out a mortgage on the family estate again. Sean finds great wealth but still lacks something in his life and when Hradsky cleans Sean and Dufford out, he is actually relieved. He goes on to rediscover the simplest pleasures, hunting ivory in the bushveld. He loses his best friend there, but finds the love of his life and what she gives him he treasures and values more than all the wealth he has ever had. The adventure finally sends him back out into the bush with his son alone, mourning the loss of his wife and thinking about Ladyburg.

More summaries and resources for teaching or studying When the Lion Feeds.

When the Lion Feeds from BookRags. (c)2022 BookRags, Inc. All rights reserved.