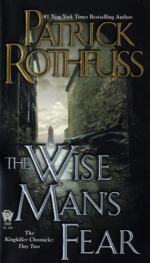 The following version of this book was used to create this study guide: Rothfuss, Patrick. The Wise Man’s Fear. Daw Books, 2011.

Kvothe, a legend who goes by the name of Kote in the present day, was the innkeeper at the Waystone Inn. During his second day of telling the three-part story of his life to the Chronicler and his friend Bast, Kvothe set the scene of his story at the start of a new term at the University. Young Kvothe prepared for the admissions lottery and subsequent interview, reuniting with friends along the way. He became involved in an altercation with his rival, Ambrose, who drugged Kvothe with a plum bob, which made Kvothe lose all his inhibitions right before his admissions interview so that he had to hastily change his time slot. Kvothe entered a disagreement with Master Hemme during his interview and the masters gave him a steep tuition rate. He visited Devi, a gaelet, to get a loan for his tuition.

Throughout the term, Kvothe frequented local bars in Imre to play his lute, spend time with his friends, and see Denna, a woman with whom he had fallen in love. He also spent time with Auri, a mysterious young lady who lived in the Underthing and met Kvothe on the roof of his inn room. He attended Master Elodin’s unconventional class about naming. Elodin convinced Master Lorren to lift his previous term’s ban that barred Kvothe from entering the Archives. At the Archives, Kvothe researched the Chandrian, the formidable creatures who he believed had killed his parents and his Edema Ruh troupe during his childhood.

Kvothe discovered that Denna had a short relationship with Ambrose. Kvothe broke into Ambrose’s rooms to steal back a ring that Ambrose had never returned to Denna. Later, Kvothe fainted while at work in the Fishery. He deduced with his friends, Simmon and Wilem, that someone was conducting malfeasance on him, using his blood. They suspected Devi, but Kvothe decided that Ambrose was at fault.

Kvothe, Fela, Mola, Simmon, and Wilem, devised a plan to get back at Ambrose. They tested a doll with Kvothe’s blood and found out that harming the doll would also harm Kvothe, like the malfeasance he had been experiencing. Kvothe’s friends set fire to Ambrose’s rooms and Kvothe broke in during the fire to look for the doll Ambrose had with Kvothe’s blood.

Later, four men arrested Kvothe, while he was playing his lute at an inn. Ambrose had arranged for Kvothe to be charged with several serious crimes. Kvothe briefly explained his trial, but did not want to dwell on the details, which had developed into hyperbolic rumors in the present day. In the aftermath of the trial, Kvothe decided to take a term off from the University.

Kvothe’s friend Threpe helped him find a potential patron in Maer Alveron of Vintas. Kvothe traveled to Severen in Vintas to meet the Maer. Alveron did not say what he needed from Kvothe for a while, so rumors arose regarding the newcomer’s role in the intricate court system. Kvothe befriended a mysterious, old noble named Bredon. Kvothe learned that Alveron desired his help to charm lady Meluan Lackless to become the Maer’s wife.

Kvothe revealed that Caudicus, an arcanist in the Maer’s employ, has been slowly poisoning Alveron in his medicines. Kvothe helped cure the Maer and wean him off the addictive poison. Caudicus fled from Severen. After gaining the Maer’s favor, Kvothe met Denna in the city. He helped write letters and songs for Alveron to give to Meluan, using Denna as his muse. Kvothe fought with Denna about her questionable patron.

After recuperating at the bandits’ old campsite, Kvothe and the mercenaries made their way back. They came across a clearing in the woods and encountered Felurian, a storied Fae goddess. Kvothe ran after her and Felurian took Kvothe as her lover for an undetermined amount of time. Kvothe’s thoughts blurred during his time in the forest glen with Felurian. Felurian taught Kvothe about Fae culture and love. Kvothe attempted to write a song for Felurian and she let him leave, with the promise that he would return to her one day to sing her the final version of the song.

In the Faen realm, Kvothe encountered the Cthaeth, a dangerous being that predicted the future and showed Kvothe his fears. Kvothe worked with Felurian to gather shadows and make a shaeth for him to wear as a cloak. When they finished the shaeth, Felurian let Kvothe return to the mortal realm, reminding him of his promise to return to her.

Kvothe reunited with the mercenary group. Several Adem mercenaries spotted Tempi teaching Kvothe Adem fighting practices and scorned him. Kvothe agreed to go to Ademre with Tempi to lessen Tempi’s punishment. They reached Haert, Tempi’s city in Ademre, after a strenuous journey. Tempi’s teacher Shehyn assigned Vashet to train Kvothe in the art of Ketan. Kvothe practiced his Ademic, hand fighting, and sword fighting skills with Vashet. Vashet also agreed to have sex with him when he felt the urge. Kvothe completed several tests to finish his studies in Haert. The leaders of the school granted him a sword and a deep name.

Kvothe left Ademre to return to Severen. During his travels, he encountered an Edema Ruh troupe, who welcomed him. A trouper offered Kvothe two girls for the night. Kvothe realized that the troupe were not truly Edema Ruh, but imposters. He killed the entire troupe and brought the girls back to their village.

Then, Kvothe returned to Severen. He revealed that he was an Edema Ruh to Maer Alveron and his new wife Meluan, who hated the Ruh. The Maer sent Kvothe away with a full pardon for his crimes against the fake Edema Ruh troupe, tuition funds for the University, and a writ similar to patronage that allowed Kvothe to play music anywhere within the Maer’s lands.

Finally, Kvothe returned to the University. He reunited with his friends. He met Denna, but she disappeared again after a few days. Kvothe ended his story as he went out to celebrate the upcoming term with his friends.