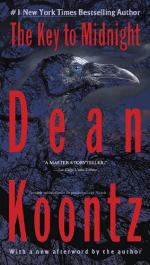 Dean Koontz
This Study Guide consists of approximately 41 pages of chapter summaries, quotes, character analysis, themes, and more - everything you need to sharpen your knowledge of The Key to Midnight.

The Key to Midnight Summary & Study Guide includes comprehensive information and analysis to help you understand the book. This study guide contains the following sections:

This detailed literature summary also contains Topics for Discussion and a Free Quiz on The Key to Midnight by Dean Koontz.

The Key to Midnight is a novel by Dean Koontz that was originally published under the pseudonym Leigh Nichols. The novel tells the story of Joanna Rand, a nightclub owner and singer who discovers that she is really the daughter of an American senator who went missing twelve years ago. Joanna has been haunted by nightmares for many of those years and comes to find out the nightmares are really memories of a sadistic doctor who brainwashed her, wiping away all her childhood memories and creating a new persona to take their place. With the help of private detective Alex Hunter, Joanna sets off on an adventure that will either reveal the truth or leave her lost forever. The Key to Midnight is a novel of intrigue that will not disappoint those familiar with Koontz's unique narrative style.

Joanna wakes from another nightmare and is too agitated to return to bed. Joanna cannot understand why she dreams the same thing over and over again, and it leaves her exhausted. A few days later, Joanna has lunch with an American tourist, who shocks her by suggesting he believes her to be someone else. Joanna does not believe him and refuses to see him when he returns to her club later that night. However, when this man, this private detective, shows her definitive proof of his claims, Joanna is forced to face the possibility that she is not who she believes she is.

Alex Hunter finds Joanna to be a fascinating creature. Her beauty and her amazing voice speak to him, but there is something deeper that calls to his soul. Alex cannot stay away from Joanna even after he realizes she is the daughter of an American senator for whom he once spent nearly a year searching. The fact that Joanna seems oblivious to her true identity only serves to intrigue Alex all the more. When a man breaks into Alex's hotel room and another tries to kill a courier from his office, Alex is even more determined than ever to learn the truth behind Joanna's strange case of amnesia.

Alex shows Joanna his case files on Lisa Chelgrin, the woman he claims she is. Alex proves that Joanna and Lisa are one in the same by comparing their fingerprints. However, Joanna still has no recollection of her life as Lisa. Alex talks Joanna into trying hypnotherapy. The psychiatrist successfully takes Joanna back in time, revealing the truth behind her strange, recurrent dream. However, the psychiatrist has no luck helping Joanna rediscover her life as Lisa Chelgrin. Instead, the psychiatrist has been able to undo some posthypnotic suggestions that caused Joanna to have panic attacks whenever she became close to someone, or thought of leaving the country.

Alex feels Joanna needs to find out why she has been brainwashed and turned into someone else. Alex encourages Joanna to go with him to London to try to find the identity of the man who appears in Joanna's dreams. In London, Joanna and Alex are contacted by Lisa Chelgrin's father, Thomas. They are instructed to meet Thomas at his hotel, but before they arrive, Thomas is killed. In his hotel room, Alex finds a group of news clippings that tell him where they can find the doctor for whom they are looking. Alex decides they must go to St. Moritz and confront this man.

The moment Alex and Joanna arrive in St. Moritz, they are kidnapped and transported to the home of Dr. Rotenhausen. Alex wakes up in the kitchen and finds it too easy to get out of his bindings. Alex searches the house and finds his gun, again much too easily. Alex goes downstairs in search of Joanna and stumbles on a room of men discussing how to kill him. Alex breaks into the room and finds one of the men is Thomas Chelgrin, surprisingly alive and well. Chelgrin tells Alex that his death had been a perfectly-executed trick to put Alex and Joanna on the trail that would lead them here. Alex is then threatened by another man in the room and he kills him and his companion. Then Alex turns the gun on Chelgrin and finds himself unable to stop from pulling the trigger.

Joanna is strapped to a gurney and being groped by Dr. Rotenhausen. Joanna is supposed to be drugged, but someone has switched the vials and she is perfectly clearheaded. Joanna manages to get loose. Joanna fights the doctor and after a time is able to get the upper hand, killing Rotenhausen with a broken bottle. Down the hall, one of the men Alex has shot is not dead. This man comes after Alex, forcing him to run. Alex runs out of the house and into the woods where he and the man engage in hand to hand combat. Eventually Alex is able to get the upper hand and kill the other man only to be confronted by the fourth man, the only man left standing.

Joanna searches for Alex and runs across Thomas Chelgrin, still alive despite a fatal chest wound. Chelgrin tells Joanna how he was born in Russia and was part of a program called the Mirror program in which he replaced an American soldier in a Vietnamese prison camp. Chelgrin was instructed to go to America and become successful, making himself powerful enough to help the Russian government steal American secrets. Chelgrin did, becoming first a Congressman and later a Senator. When Lisa stumbled across this secret, Chelgrin had no choice but to allow his Russian comrades to take her away and brainwash her, keeping her alive but hidden for her own safety.

Alex returns to the house with the fourth man, Peterson, and finds Joanna. Joanna tells Alex what Chelgrin told her. Peterson confirms it, confessing he, too, is part of the Mirror project. However, Peterson turned double agent years ago and is working with the CIA to stop Chelgrin from becoming President of the United States. The CIA brainwashed Alex the year before and arranged for him to meet Joanna, to come to St. Moritz, and to kill Chelgrin in an act of self defense. Now Alex is supposed to call the police and give them a contrived story. Instead, Alex and Joanna decide to write their story down, give it to a dozen lawyers in different countries, and use it to guarantee that the CIA will not one day decide they are loose ends that need to be taken out. With that done, Joanna and Alex decide to return to Kyoto and live out their days in peaceful bliss.

More summaries and resources for teaching or studying The Key to Midnight.

The Key to Midnight from BookRags. (c)2022 BookRags, Inc. All rights reserved.