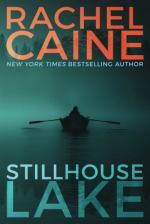 Rachel Caine
This Study Guide consists of approximately 72 pages of chapter summaries, quotes, character analysis, themes, and more - everything you need to sharpen your knowledge of Stillhouse Lake.

In Stillhouse Lake by Rachel Caine, Gwen Proctor, ex-wife of serial killer Melvin Royal, believes she has found a place where she can safely live with her children. Then, a body (killed in the style of her ex-husband) is found in the lake. Gwen realizes this one body might be a coincidence. However, when a second mutilated body is found, Gwen knows Melvin is sending her a message. Although Melvin is willing to do whatever it takes to ruin Gwen’s life, he does not count on how independent and self-sufficient his ex-wife has become.

Before taking on an assumed identity for safety, Gwen was known as Gina Royal. Gina had believed that she had a normal marriage and family life with her husband (Melvin) and their two children (Lanny and Connor). Then, a freak accident revealed that her husband had been torturing and killing women in their garage. Even though Gina had known nothing about what Melvin was doing, she was still put on trial in connection with his crimes. She was acquitted, but Internet vigilantes who believed that she had gotten away with her crimes made violent threats against her and her children. For this reason, Gina changed her name to Gwen Proctor. She and her children went into hiding trying to avoid the people who wanted to hurt them. They had lived in four places and had four different identities in as many years. Gwen desperately wanted them to be able to settle down.

When the first body is found in the lake, Gwen begins to make plans to leave. She is not sure that she can trust anyone. She buys a cargo van from Javier, the man who runs a gun range. Javier turns out to be a reserve deputy. When she calls him to bring the van to her, he alerts the police that she might be thinking about running away. He has heard that the police want to question her about the murders and believes it is his moral duty to keep her from leaving town.

Meanwhile, Sam Cade, the man with whom Gwen was beginning a romantic relationship turns out to be the brother of one of Melvin’s victims. Gwen believes he only pretended to be a friend so he could get close to her in connection with his sister's murder.

Lance Graham, a police officer who lives nearby, even seems untrustworthy. He returns Connor's phone to him one day. Graham claims his sons found it on the bus, but Connor swears he did not lose his phone. Gwen later learns that Graham’s sons beat Connor up one day at school, but Connor never told her because he did not want to have to move.

Things come to a head when Gwen’s real identity is revealed to others and she is threatened by a group of men in town. The next day, Gwen’s children disappear. After she is questioned and set free, Gwen rides with Graham to join a group looking who is looking for her children. Soon she realizes that she has fallen prey to the man who wants to kill her.

Gwen stands her ground against Graham when she discovers he is a fan of Melvin’s wok. As she fights to stay alive and locate her children, Gwen learns that Melvin has been dictating the actions at Stillhouse Lake from the beginning. Graham, as well as Absalom, the man Gwen trusted to get her false identities and help her relocate in the past, have been working in conjunction with Melvin all along.

When Gwen gets Graham to tell her the whereabouts of Connor and Lanny, she finds them safe. However, they are being held in a cellar set up just like Melvin’s garage at home. As the novel ends, the detective who is working the case warns Gwen that Melvin has broken out of El Dorado prison. Gwen swears to herself that she will kill him.

More summaries and resources for teaching or studying Stillhouse Lake.