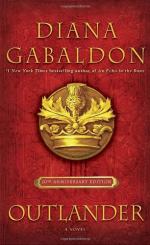 Diana Gabaldon
This Study Guide consists of approximately 98 pages of chapter summaries, quotes, character analysis, themes, and more - everything you need to sharpen your knowledge of Outlander.

This detailed literature summary also contains Topics for Discussion and a Free Quiz on Outlander by Diana Gabaldon.

It is the year 1945. Claire Randall lived for the past six years as an army nurse while her husband, Frank, served in the war. She appears to be somewhat passive on the outside, with her deep brown, untamed hair and pale skin; but internally she is a woman who wants a family and wants to get to know her husband again after his 6 years away. She was left in the care of her uncle after her parents died when she was 5 years old.

Claire and Frank have been married for seven years. They enjoy their lives together in Scotland, living in a Bed and Breakfast. Frank has a deep interest in his Scottish roots and studies his past in the library. Other means of his revelations come from his historian friends. Together, Frank and Claire travel to the standing stones, near the outskirts of town, to secretly view the rituals that the town women perform together. The town refers to these women as witches.

This is where Claire enters the year 1743. After the visit to the standing stones with Frank, she returns alone to retrieve a plant she wanted. Claire so loved herbs and plants. Frank asked her to also look for traces of fire, for it was part of the witch's ritual. When Claire returns, she leans against one of the standing stones and is transported back in time to the brutal and raw Highlands of Scotland. At first she feels as if she's in some sort of movie filming and people are all in costume. She immediately gets caught up in a fight between two local clans of Scots and is whisked off on horseback to be questioned at a nearby castle. They question her attire and her English accent. She realizes very quickly that it really is 1743 and this is no movie. She must keep quiet and fight for her life.

First, Claire is attacked by Jonathan Randall, who is actually Frank's ancestor. He is a rude Captain and tries to force himself upon her. Jamie Fraser enters the picture as her rescuer from Jonathan Randall. In his accompaniment are his uncles, Colum and Dougal, who cautiously take Claire in. Jonathan Randall was one of their mortal enemies, but had a Captain's rank.. As the story unfolds, Claire is thought to be some sort of English traitor, because of her accent and attire. Colum takes her in at castle Leoch, but very cautiously, and tries to get her to talk. The members of the clan and the castle slowly take a liking to Claire.

Claire is consumed by thoughts of escaping and going back to the standing stones, so she can get back to her own time and to Frank. Events unfold that make it impossible for her to return. Jamie is a wanted man with a price on his head for a crime he did not commit. As it turns out, the crime was actually committed by Jonathan Randall. Jamie is on the run, because of these crimes and Claire doesn't help matters, due to her 1900's attitude and demeanor. She offends Jonathan, resulting in his jealousy and great hate for her. He has taken it upon himself to make Claire and Jamie suffer (each for their own crimes against him and Scotland). Dougal devises a plan to help both Claire and Jamie by marrying them. Jonathan cannot come after Claire if she is married to Jamie and taken in by his MacKenzie uncles.

At first, the marriage is against the will of both Claire's and Jamie, but slowly they come to not only look out for one another, but also to fall madly in love with each other. As they become closer, Claire finds it necessary to tell Jamie the truth of her past. He listens, but is torn because he is in love with her. He takes her to the standing stones and orders her back to her own time. Claire fights a battle of wills within herself, as it's been months since she left her own time and she has such loyalty to Jamie. She is not sure what to do, but chooses to stay with Jamie. After the choice is made, the two are inseparable. They vow to be together no matter what happens to them.

They return to Lallybroch (Jamie's home) where his sister, Jenny, and her husband, Ian. Welcome them. Jenny and Ian have since had a child together, which they named Jamie. They stay at Lallybroch as long as they can; but it is short lived, as the English are after Jamie for the crimes he's accused of. They escape together, only to have Jamie captured and put in Wentworth prison. Claire fights all odds and rescues him. She nurses him back to health after he is brutally raped and beaten at the hands of Jonathan Randall.

In the end Jamie and Claire end up in France at the Abbey. They accept the help of the monks, and Jamie slowly recovers. Their love for one another triumphs; and it is told to Jamie that Jonathan Randall died during his escape at Wentworth. Jonathan dies being trampled by cows. This is of no solace to Jamie; but he and Claire move on. In the last chapter Claire announces to Jamie that she is with child. This is a new beginning for them and a nice end to the book.

More summaries and resources for teaching or studying Outlander.