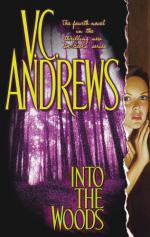 Plot Summary
+Chapters Summary and Analysis
Chapter 1: The Life and Chapter 2: My Personal Radar Screen
Chapter 3: A Convenient Sprain and Chapter 4: Men And Their Toys
Chapter 5: Two Girls Together and Chapter 6: Augustus and Phoebe
Chapter 7: A Game Of Secrets and Chapter 8: Counteroffensive
Chapter 9: Mommy and Mrs.Greenstein
Chapter 10: A Bridge To Cross
Chapter 11: The Myth of Icarus
Chapter 12: Twenty Dozen Roses
Chapter 13: Happy Forever
Chapter 14: Welcome To Palm Beach
Chapter 15: A Man Like Winston Montgomery
Chapter 16: None So Blind
Chapter 17: A Taste Of What's To Come
Chapter 18: Subterfuge
Chapter 19: One Last Salute and Epilogue
Characters
Objects/Places
Themes
Style
Quotes
Topics for Discussion
Order our Into the Woods Study Guide

Into the Woods Setting & Symbolism

Virginia C. Andrews
This Study Guide consists of approximately 54 pages of chapter summaries, quotes, character analysis, themes, and more - everything you need to sharpen your knowledge of Into the Woods.

Grace's family transfers to Norfolk, Virginia when she is fifteen.

Dragon Whales is the name given to HC-8.

Ch-46 Sea Knight is a type of helicopter used in search and rescue, and for vertical replenishment used to support the Atlantic Fleet.

Mother Dotty's Kitchen is the first diner Grace and her mother stop at on the way to Florida, it has old fashioned appeal with red leather booths and plenty of chrome.

Tremont Inn is the restaurant owned by Warren and Dallas in a Palm Beach County region known as Palm...

More summaries and resources for teaching or studying Into the Woods.

Into the Woods from BookRags. (c)2022 BookRags, Inc. All rights reserved.