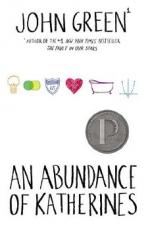 John Green (author)
This Study Guide consists of approximately 24 pages of chapter summaries, quotes, character analysis, themes, and more - everything you need to sharpen your knowledge of An Abundance of Katherines.

An Abundance of Katherines Summary & Study Guide includes comprehensive information and analysis to help you understand the book. This study guide contains the following sections:

This detailed literature summary also contains Topics for Discussion and a Free Quiz on An Abundance of Katherines by John Green (author).

An Abundance of Katherines is a novel by award-winning author John Green. In this novel, Colin Singleton is a prodigy and genius who just graduated from high school. Colin was just dumped by his nineteenth girlfriend in a row and all of his girlfriends have the name of Katherine - all spelled the same way. After Katherine the XIX dumps Colin, Colin's best friend, Hassan, comes to Colin's room to convince him that he needs to take a road trip to clear his mind and have an adventure. While it takes some convincing on Hassan's part, Colin finally agrees to go on the road trip. Once the boys convince both of their parents to let them go for the summer, they hit the road in Colin's car, which they call The Hearse. One of Colin's favorite pastimes is to anagram, which is to rearrange letters to create new words, sentences and phrases. Another pastime Colin commits to while on the summer roadtrip is a theorem that predicts how long two people will stay in a relationship, as well as who will be the Dumper and who will be the Dumpee. Colis plans to use his past relationships with the nineteen Katherines to see if the theorem works.

While Colin and Hassan are on the highway, Colin sees an exit, which brags that it has the grave of Archduke Franz Ferdinand, which is the body responsible for starting World War I. Colin and Hassan take the exit and find themselves in Gutshot, TN. The tour of the grave is behind a convenient store, where the girl behind the counter, Lindsey Lee Wells is their tour guide. After the tour, the boys return to the convenient store where they meet Lindsey's mother, Hollis. Hollis's family owns the factory in town that has been running since the early twentieth century. When Hollis meets Colin and Hassan, she invites them to her house for dinner. While having dinner, Hollis offers the boys a summer job to gather stories from the factory workers and townspeople. She also offers them room and board at her home.

As the boys meet with the factory workers and townspeople, they learn what a special town Gutshot truly is, even though it is completely different from Chicago, where the boys live. While working their summer job, Colin continues to work on the theorem. Hassan continues to work on his people skills, which eventually lands him one of the prettiest girls in town, Katrina. Even though Lindsey is dating one of the most popular boys in town, the former high school quarterback, who is also a Colin, Colin Singleton and Lindsey grow closer as the summer continues. Lindsey even helps Colin figure out that his theorem may work if he includes more variables in the equation.

In the end, Colin, Hassan, and Lindsey all learn about coming of age. They learn about what the future holds for each of them, about the importance of friendship, and about how friendships often turn into romantic relationships.

More summaries and resources for teaching or studying An Abundance of Katherines.

An Abundance of Katherines from BookRags. (c)2022 BookRags, Inc. All rights reserved.