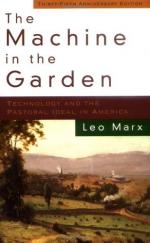 The Machine in the Garden; Technology and the Pastoral Ideal in America Test | Final Test - Easy

1. What was Daniel Webster's take on industrialism?
(a) He loathed the railroad.
(b) He used it to his profit.
(c) He lamented the changing structure of society.
(d) He embraced the new power.

2. What has happened to the ideal of the pastoral society, in Marx's opinion?
(a) It has replaced the industrial utopia.
(b) It is a token belief.
(c) It is a governing principle.
(d) It has become the rallying cry for opposition to industrial modernism.

3. What did Daniel Webster believe the railroad would do for America?
(a) Unify the people.
(b) Corrupt the youth.
(c) Terrify the livestock.
(d) Destroy the traditions.

5. What kinds of machines especially did Americans welcome at the end of the 18th century?
(a) Railroads.
(b) Telegraphs.
(c) Milling machines.
(d) Machine tools.

6. What symbolic statement does Marx say Twain made in the raft being destroyed in Huckleberry Finn?
(a) Hiding from society is impossible.
(b) Man is alone in the river of life.
(c) Technology has progressed beyond steamboats.
(d) Fleeing from the law is dangerous.

9. What role has literature played in the formation of the culture Marx describes in 'The Machine in the Garden'?
(a) Literature inspired the urge to abandon farms for cities.
(b) Literature guided people as they settled the land.
(c) Literature spurred the developments that shaped the landscape.
(d) Literature reflected the changes after they had happened.

10. What modern problem does Marx take as emblematic of man's treatment of nature?
(a) Pandemics.
(b) Wars.
(c) Industrial agriculture.
(d) Pollution.

11. How does industrialism devalue man, in Carlyle's opinion?
(a) It requires long hours in dark factories.
(b) It treats him as a commodity.
(c) It uses only one part of him.
(d) It discourages invention.

13. What defines complex pastoralism?
(a) Redemption of the alienation that comes from industrial modernity.
(b) Refusal to let sentimental pastoralism lapse.
(c) Industrial machinery fostering nature.
(d) Acceptance of history.

14. How does Marx predict the trend toward urbanization and industrialization will be reversed?
(a) By market changes.
(b) By politics.
(c) By resource depletion.
(d) By popular uprisings.

15. What did Coxe contrast manufacturing with?
(a) Importation.
(b) Cottage industry.
(c) The trades.
(d) Self-reliance.

1. What conclusion about technology does the narrator reach at the end of Twain's Connecticut Yankee in King Arthur's Court?

2. What structures does Marx use as examples of how modern man mistreats nature?

3. What is the consequence of knowing nature, according to Twain's work?

4. How does Marx characterize man's hopes for nature?

5. What skill did Twain idealize?

The Machine in the Garden; Technology and the Pastoral Ideal in America from BookRags. (c)2022 BookRags, Inc. All rights reserved.