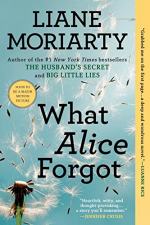 Liane Moriarty
This Study Guide consists of approximately 58 pages of chapter summaries, quotes, character analysis, themes, and more - everything you need to sharpen your knowledge of What Alice Forgot.

This detailed literature summary also contains Quotes and a Free Quiz on What Alice Forgot by Liane Moriarty.

What Alice Forgot, a novel by Liane Moriarty, starts out with the titular character in bed, obsessing over all of the rules that she has to follow because she’s pregnant. Her thoughts are routinely interrupted by other memories and she suddenly finds herself in a gym. Alice thinks this has to be a mistake because she would never go into a gym. It’s eventually made clear that she hit her head. Alice starts to ask her classmates questions that only get her stranger answers, as though she were asking something ridiculous. The paramedics arrive and start asking Alice questions, including how old she is. She says 29, but one of her friends informs them that Alice is in fact turning 40 later that year. They ask Alice what year it is and she answers 1998, when it is in fact 2008.

The paramedics bring Alice to the hospital. She manages to get in touch with her sister, Elisabeth, whom she’s incredibly close to. She’s also trying to get in touch with her husband and the love of her life, Nick. Elisabeth eventually arrives and Alice realizes things aren’t right. Elisabeth seems distant and their relationship has clearly changed in the last ten years. Alice is even more shocked when she gets in touch with Nick, who is incredibly flippant and outright hostile towards her. Elisabeth tells her not only is she getting divorced, but she’s in the middle of a vicious custody battle for her three children.

Elisabeth brings Alice home and catches her up on everything that’s happened in the last ten years. Alice has become a very busy person and the two of them grew distant. Elisabeth has been struggling for seven years to have a child with her husband, Ben. Each time she has a miscarriage, and it’s driven her into a severe depression. Alice was always too busy to help her through it because she had her own family to raise. Alice is horrified when she hears about that. She wants to do everything she can to fix things with Nick and her sister.

Alice quickly finds herself overwhelmed with being a mother. Nick offers her some support, but he’s hesitant to actually spend any time with Alice. Over the last ten years, their relationship had dissolved to the point where they couldn’t stand one another. Alice begins to get some of her memories back, but they come in the form of brief flashes and muscle memory. She has a memory about a woman named Gina, but nobody in her family wants to talk about it.

Alice believes that Gina had an affair with Nick and that’s what broke their relationship. The truth is soon revealed to her, that Gina was her best friend who had recently passed away. Gina is the reason that Alice and Elisabeth drifted apart, and part of the reason why Nick and Alice started to fight in the first place. Gina’s relationship with her husband fell apart and Nick felt like Alice was envious that her best friend was single. Alice was always complaining that Nick didn’t care about her, and he was too obsessed with work. They started to fight over every little thing.

Alice doesn’t care about any of that, now, and she’s determined to fix her family. At the same time, Elisabeth continues to descend into depression because of her miscarriages. She has one last chance to get pregnant, but she can’t handle the pressure. Alice is finally there for her, and with her help she’s able to get through her depression and finally ends up pregnant.

All at once, Alice’s memories start to come back. Things are going better with Nick, but he can tell that everything changes when her memory returns. Alice realizes how foolish she’s been and she pulls away from Nick. She learns some things from her past self, though and manages to repair their relationship and strengthen the bonds with her children and her sister. Years later, Alice and Nick manage to reconcile and happily raise their family together.

More summaries and resources for teaching or studying What Alice Forgot.