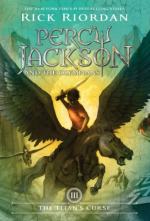 Rick Riordan
This Study Guide consists of approximately 49 pages of chapter summaries, quotes, character analysis, themes, and more - everything you need to sharpen your knowledge of The Titan's Curse.

This detailed literature summary also contains Quotes and a Free Quiz on The Titan's Curse by Rick Riordan.

Titan’s curse, book three of The Heroes of Olympus by Rick Riordan, begins with Percy’s mother driving him and fellow demigod campers Annabeth and Thalia towards the military school, Westover Hall. The group is responding to a distress call from Percy’s best friend, the satyr Grover. Grover had been sent to the school to recruit more demigods for Camp Half-Blood, as Luke had been trying to steal them away to join his and Kronos’s Titan army. Thalia uses her abilities to charm the school staff, letting the group blend in and sneak into a school dance. There, they reunite with Grover who identifies two of the students, Bianca and Nico di Angela as being demigods. Before they can get away, the group is separated and Percy is attacked by the Principal, Dr. Thorn, who is in fact a monstrous Manticore.

Percy tries to fight him and protect the siblings, but Dr. Thorn is too powerful. He tells Percy that he will be taking them to see someone known as the General. Before he can take the group away, several women show up with the goddess Artemis, rescuing Percy and the others. During the rescue however, Annabeth is thrown over the mountain along with the Manticore. The women are a group known as the hunters. Artemis only accepts young females to join her in the hunt because they haven’t been distracted by other things in life, namely boys. Her second in command, Zoe, clashes with Thalia. Artemis recruits Bianca to join the hunters, explaining how if she joins she will be made immortal and will defend the world from monstrous threats. Bianca accepts, which angers Percy since he feels she’s giving up on her younger brother, Nico.

When Artemis hears about the General she tells Percy and the others that she needs to hunt the creature alone. She sends the hunters to Camp Half-Blood with Percy’s group. Once there, the camp officials declare a game of Capture the Flag will take place, as per tradition when the hunters arrive. Thalia and Percy co-captain the Camp Half-Blood team, who due to Percy, ultimately end up losing to the hunters. After the game, the Oracle shows up and gives a prophecy, saying that the hunters and campers need to work together and go on a quest to stop the General, but the prophecy also predicts that two of the five that must go will not survive.

It is decided that Zoe, Thalia, Bianca, Grover, and a girl named Phoebe will go on the quest. Percy is dejected, especially when he has a nightmare about Annabeth being brought before Luke. The next day he’s approached by the Pegasus Blackjack, who needs his help to free a part-cow, part-serpent creature that has gotten entangled in a net. Percy frees the creature, and on his way back to the camp finds Nico spying on the hunters as they get ready to leave. Percy finds out that Phoebe is unable to go on the quest, and that Zoe has been having her own visions so she’s leading the group out sooner than expected.

Percy follows the group on his Pegasus. He follows them to Washington, but before he reconvenes with them he spots Dr. Thorn stalking the group. Percy follows him into a meeting with his rival Luke as well as the General. The General creates skeletal monsters that camouflage themselves as humans, sending them after the group. He intends to use an item that has Thalia’s scent on it as he wants her alive, but Percy steals it away, causing the skeletons to catch his scent instead.

Percy escapes the building and meets up with Thalia and the others. Together, they fight off a bronze lion, with Percy outsmarting the creature. Zoe rewards him with the mane of the lion, which acts as a protective jacket. With the aid of the god Apollo they begin their journey to San Francisco, where they know they can find Annabeth and Artemis, who was captured by the General. Apollo tells them of a guide who can help them in San Francisco. Along the way, Grover finds evidence of the long lost nature god, Pan. This fascinates Grover as it was his life quest to find the missing god.

On their journey, Percy gets the chance to speak with the goddess Aphrodite. She tells him that she arranged for the fifth hunter to get sick so Percy could take her place. She supports Percy because of the love that he shares for Annabeth. She warns him that they will be coming upon a junkyard soon and they shouldn’t take anything from it. When they arrive, Bianca ends up taking a statue she intends to give to Nico. This causes a giant bronze guardian to try and stop the group. Feeling responsible, Bianca brings the creature down, but has to sacrifice herself in the process.

The group gets to San Francisco and follow up on the lead from Apollo. They learn that Luke and the General are on the top of a mountain where the hunters live. Percy encounters the serpent creature he had saved earlier, and the others recognize it as being a mystical creature, the Ophiotaurus. In the past, the Ophiotaurus could be sacrificed in order to get the power to destroy the gods. Grover goes into the sea to lead the creature to safety while the others continue to rescue Annabeth and Artemis.

Percy gets help from Annabeth’s father who recently moved to the area. He gives them a vehicle to take up to the mountain. They get to the garden where the huntresses are, but they refuse the group passage, as they don't recognize Zoe and the others. Zoe wakes up a sleeping dragon in the garden, using the distraction so they can get up to the top of the mountain. Once there, they find that Artemis was being used to take Atlas’s place, holding up the giant cavern roof. The General is revealed to be Atlas himself, as well as Zoe’s father. Atlas and Luke try to get Thalia to summon the Ophiotaurus, but she refuses and says she will never work alongside the Titans.

Percy and the others get into a fight with Atlas. Percy frees Artemis, taking her place to hold up the cavern roof. Zoe gets injured in the fight, but Artemis manages to outsmart Atlas and gets him to swap places with Percy, so he is once again holding up the sky. Thalia throws Luke off of the mountain. The group gets swarmed by an army of monsters, but Annabeth’s father shows up to save them. Artemis tries to treat Zoe, but her injuries are too great and she passes away. Afterwards, Artemis takes them to Olympus to decide what to do about the Titan threat.

The gods agree that they are going to fight the Titans. They are worried about Percy and Thalia though, as a prophecy from the earlier books say that one of them will betray the gods when they turn 16. Thalia is closest to turning 16, so she pledges herself to Artemis and becomes a hunter, effectively keeping her at the age of 15 forever. While they are still worried about Percy, he’s far enough away from 16 that they are willing to let it slide. Percy and the others return to the Camp where Percy has to tell Nico about Bianca dying. During the conversations they are attacked by the skeletal creatures that Atlas created before. Nico displays his power and drives the creature away; causing Percy to realize that he is a son of Hades, meaning he is also a possible applicant for the prophecy. Nico runs off, blaming Percy for the death of Bianca. The book ends with Grover telling Percy that he knows where Pan is and they have to go and get him.

More summaries and resources for teaching or studying The Titan's Curse.