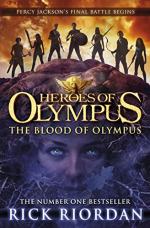 The Blood of Olympus Summary & Study Guide includes comprehensive information and analysis to help you understand the book. This study guide contains the following sections:

This detailed literature summary also contains Quotes and a Free Quiz on The Blood of Olympus by Rick Riordan.

In the fifth book of the Heroes of Olympus, by Rick Riordan, the characters Jason, Piper, and Annabeth have decided that they need to find out what Gaea, the Earth Mother, has planned. In the previous book, she was awakened as the heroes discovered and removed the Athena Parthenos from Arachne's lair. Learning of a great 'gathering' of Gaea's minions, Jason, Piper, and Annabeth go undercover.

Jason is mistakenly identified by Antinous. This is a good gamble as the ghouls enjoy speaking about how Gaea has promised to reward them when she comes back into power. Luckily, the ghoul goes on to say that there is a way to safely navigate and avoid the Straits....they would have to go o by way of Peloponnese. Jason is discovered and mortally wounded when he is run through by a ghoul wielding a special sword made to kill demigods. Juno is called upon and refuses to heal Jason, but does tell them to find Nike and capture her.

The other heroes have been on their own mission to return with the Athena Parthenos and take it to Athens. In order to do this quickly, they are using Nico's ability to shadow travel. Reyna, a Roman praetor, and Coach Hedges, join Nico in attempting to get the Parthenos to Athens, but it goes sideways when Nico drops them in the middle of Pompeii.

Olympia is in ruins when they arrive. They are about to leave when Leo makes an offhanded comment about Adidas versus Nike. They hear an enraged voice screaming: You Will Die Now. Nike, too, is suffering the same conflict of identity. She demands a competition and a winner and a loser.

Nike is out of her mind. She is demanding that they fight to the death for her honor. After some close calls, the heroes manage to capture Nike in a special net made of gold. The ship is now able to move and they quickly take off.

Nico, Reyna, Coach and the Statue land in Portugal. Nico sees a ghost on fire beckoning to him. Following the ghost, they arrive at a temple dedicated to Hades. He tells Nico that Orion, the famed hunter, is on their tails and that the only way to really survive is to outrun him. Hades tells Nico that some deaths cannot be prevented, which deeply grieves Nico.

Meanwhile, Leo and the others manage to retrieve the poison of Pylos. Piper and Annabeth decide that they should go find the chained god in Sparta. Annabeth and Piper face a series of battles. Before they can figure out their next steps a giant appears. To make things worse, they find out that they are in the 'cave of fears'.

Piper puts her cornucopia at the statue’s feet for a sacrifice, then takes the statue’s head. This releases the makhai, spirits of battle. They swirl from out of the statue and into Piper, who now has the power to take down the giant.

After a short stop on a cruise ship, Nico then takes the group to San Juan. Before she can concoct a plan Reyna is shot in the neck by a silver dart and is carried off.

It isn't Orion who has captured Reyna, but Jason's sister, Thalia Grace. She tells them that they had been using Reyna as bait to draw out Orion.

Meanwhile, the Argo II is in trouble. A violent storm has nearly capsized the boat. Percy and Jason go into the water (Jason in an airbubble) to find out what is causing the storm and why Percy cannot control the water in this area.

Kymopoliea is upset because no one knows about her as a minor goddess. They are attacked by the giant's basilisks, and Percy is bitten. Jason offers Kym a shrine and an action figure. Kym agrees and cuts Polybotes’ head off in one swoop. Kym heals Percy and warns him that his blood will awaken Gaea.

The Argo II arrives at the island of Delos, looking for something called the 'curse' of Delos. Leo tells Apollo that he makes the finest of all instruments. Apollo states that if this is true he will tell him about one of the ingredients for the physician's cure...a flower, which is called 'the curse of Delos'. He also tells Leo that if the heroes will take the ingredients to Apollo's son, Ascelpius, that he will make the cure for them.

Asclepius gives them the physician’s cure along with a pair of glasses for Jason. He matter of factly predicts long lives for all of them, with the exception of Leo.

When they make it to Porphyrion’s throne it was revealed that he is holding Annabeth and Percy hostage. A large battle ensues and Percy's blood, in the form of a single drop, hits the ground. The Earth Mother awakes.

Will and Nico realize that they can re-position the onagers in such a way that they will destroy themselves.

When Frank lands with everyone they see the ground has turned fluid and is roiling underneath everyone's feet. Gaea stands, but before anything can happen further, Leo, using Festus swoops down and carries Gaea off. Leo tells them to trust him. Festus explodes changing the sky to a golden color.

Octavian is still not backing down. Nico and Will find him by an onager where he's planning to fire on them. Unknown to Octavian his robes have gotten wound into the mechanism. Will tries to stop Octavian but Nico stops him when he remembers his father's words, that some deaths are necessary. Octavian blows himself up.

The win is bittersweet as it is clear to all of them that Leo has died, but in doing so has secured their safety. Jason shares with the others that he believes that Leo may actually be alive somewhere out there. As it turns out, everyone is right about Leo. He did, indeed, die, but he had programmed Festus to inject him with the physician's cure. Once he comes to he and Festus manage to overcome Calypso's curse and he's able to find her island again.