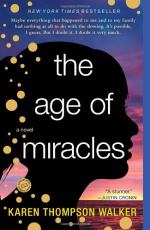 The Age of Miracles Setting & Symbolism

The sixth of October is the date on which officials formally announce that the rotation of the Earth has changed and the days are getting longer.

The Slowing is the term that is given to the lengthening of the days caused by the slowing of the Earth's rotation.

Julia wears this tiny gold nugget that her grandfather found in Alaska on a chain around her neck. The gold nugget is lost when Daryl pulls up Julia's shirt to prove that she is not wearing a bra.

A Post-It note is what Julia's science teacher, Mr. Jensen, uses display the length of each day in hours.

Gravity sickness is a term used loosely to describe a variety of symptoms, including dizziness, fainting, shortness of breath, that have become associated with the increased strength of...