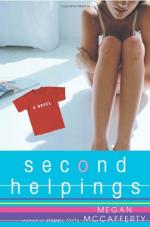 Megan McCafferty
This Study Guide consists of approximately 46 pages of chapter summaries, quotes, character analysis, themes, and more - everything you need to sharpen your knowledge of Second Helpings.

Second Helpings is the second in a series of novels by author Megan McCafferty. The story follows the main character, Jessica Darling, as a high school senior trying to make it through her final year of school. Jessica is also trying to make a decision about which college she wants to attend, while also dealing with the aftermath of her almost losing her virginity to the elusive Marcus Flutie. The novel chronicles her final year of high school through letters to her best friend, Hope, and Jessica's journal entries.

When the novel first opens, Jessica is attending a special summer writing program in New York City, the summer before she starts her senior year of high school. She runs into her old high school crush, Paul Parliapiano, who attends Columbia University. During Jessica's conversation with Paul about the colleges that she intends on applying to, she realizes that she wants to actually attend is Columbia. The problem is that her parents think New York City is dangerous and not a place for Jessica to attend college.

When the instructor of her writing program recognizes Jessica's talent for writing, he even writes her a letter of recommendation to include with her application to Columbia. While Jessica awaits the response from Columbia, she keeps her application a secret from her parents. In the meantime, her beloved grandmother, Gladdie, dies and leaves Jessica $50,000 to do with as Jessica pleases. When her acceptance letter from Columbia arrives, the Darlings are distraught when Jessica decides to use the money from Gladdie to pay for the first three and half semesters of attending. By the end of the novel, Jessica and Marcus are a couple and she graduates from high school. Jessica prepares for the next phase of her life - college.

This coming of age novel reveals the trials and tribulations that teenagers of the 21st Century face. While life throws Jessica several curve balls, she learns to deal with each hurdle with style and grace. In the end, she even learns that every experience you have in life makes you the person that you are. She decides that she likes the person she is so far.

More summaries and resources for teaching or studying Second Helpings: A Novel.