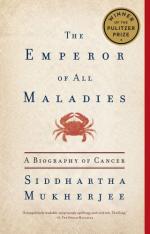 The Emperor of All Maladies: A Biography of Cancer Test | Mid-Book Test - Medium

Siddhartha Mukherjee
This set of Lesson Plans consists of approximately 136 pages of tests, essay questions, lessons, and other teaching materials.

4. Mukherjee explains that biology is based on how many fundamental tenets?
(a) Four.
(b) Six.
(c) Eight.
(d) Two.

2. Cole believed that surgery was often what?

3. The parcel Farber was expecting contained aminopterin, a __________ crystalline chemical that Farber hoped could be used in deterring the growth of childhood leukemia.

5. In 1968, there were noteworthy successes where?

2. What are the two schools of thought regarding surgery? Why was this such a problem?

3. How could this battle regarding surgery be ended?

4. How was this letter to Richard Nixon significant at the time?

5. What is VAMP? What about this might have surprised Zubrod?

6. Why did breast cancer clinical trials last ten years? How could these trials have been run better?

7. What did FDR do to fight cancer? What caused support of cancer research to wane? Why?

9. Why was John Bennett wrong?

10. How is cancer a total disease? How is this important?

More summaries and resources for teaching or studying The Emperor of All Maladies: A Biography of Cancer.

The Emperor of All Maladies: A Biography of Cancer from BookRags. (c)2022 BookRags, Inc. All rights reserved.