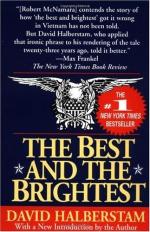 The Best and the Brightest Chapter Abstracts for Teachers

David Halberstam
This set of Lesson Plans consists of approximately 136 pages of tests, essay questions, lessons, and other teaching materials.

• Kennedy met with Robert Lovett, and they discussed appointments for Kennedy's administration.
• The Kennedy administration also drew support from Chester Bowles, who had contacts with the older Democracy Establishment, but Bowles' popularity soon faded.
• Kennedy represented the new crowd in American politics, and Kennedy had to compensate for his youth and inexperience by appointing older advisers.

• A number of candidates were considered for Secretary of State before Kennedy settled on Dean Rusk.
• Chester Bowles was the Undersecretary of State, and the administration came into office with optimism and momentum.
• With a reputation for elitism and intellectualism, poetry and small gatherings, the Kennedy administration brought excitement to the White House.

• Kennedy's administration did not get off to a good start, with the botched invasion of Cuba among other international difficulties.
• When France returned to Indochina in 1961, tensions began to escalate, and threatened the...

More summaries and resources for teaching or studying The Best and the Brightest.

The Best and the Brightest from BookRags. (c)2021 BookRags, Inc. All rights reserved.