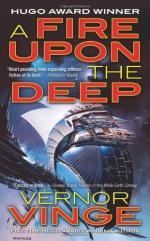 A Fire upon the Deep Test | Mid-Book Test - Medium

2. What does Johanna realize about her captives?
(a) They confer on everything.
(b) They are not very intelligent.
(c) If she hurts one, she hurts them all.
(d) They are very slow moving.

3. Where are Blueshell and Greenstalk sent?
(a) To an island prison.
(b) On a secret mission to the Bottom of the Beyond.
(c) To rescue some miners stranded in the Blight.
(d) To produce their third generation.

5. What do the observers call those who take the pup-like figures from the ship?
(a) Witch women.
(b) Medicine men.
(c) Whitejackets.
(d) Pack leaders.

1. Who hopes to prevent the plans for the alien ship?

2. What does Johanna vow?

3. How does Ravna wish she could learn more about the Slowness?

4. About what does AA seek information?

5. What does Steel want to use against the Woodcarvers?

1. What is Lord Steel dealing with as Woodcarver's forces advance?

2. What is the aftermath of the fight at Saint Rihndell's Repair Harbor?

3. What are the Olsndots' priorities after landing?

4. How is the curse of the Pharoah's tomb related to what the humans from the Straumli Realm are doing on Earth?

5. About what does Twirlip of the Mists wonder and what is the Alliance for the Defense's response?

6. Describe Pham and Bluestalk's descent to the planet surface and their attack and why they suddenly stop attacking with their beam?

8. What happens that Blueshell likens to a tsunami?

9. How do Peregrine and Scriber describe the humans?

10. How does Pham stop the Blight and what happens to him?