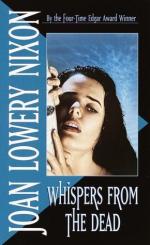 Joan Lowery Nixon
This Study Guide consists of approximately 31 pages of chapter summaries, quotes, character analysis, themes, and more - everything you need to sharpen your knowledge of Whispers from the Dead.

Whispers from the Dead Summary & Study Guide includes comprehensive information and analysis to help you understand the book. This study guide contains the following sections:

This detailed literature summary also contains Topics for Discussion on Whispers from the Dead by Joan Lowery Nixon.

Whispers From the Dead by Joan Lowery Nixon, prolific author of mysteries and thrillers for young adults, focuses on teenager Sarah Darnell. While out swimming with friends in her hometown of Spring, Missouri, Sarah almost drowns when a friend's cannonball into the water pushes her down into the weeds at the bottom of the lake. This experience leaves her with an intense fear of water and swimming, as well as a newfound sensitivity to "the other side." When Sarah mentions her newfound sensitivity to spirits to her friends they are afraid of her, and her parents put her in therapy. Sarah learns to keep her problems to herself.

When the family moves to Houston, Sarah begins having visions of the murder that took place in their new house. The family was not told about the murder prior to moving in, and feel betrayed by their new neighbors. Meanwhile, Sarah befriends her next-door neighbor Dee Dee and begins dating Tony, a mysterious older boy from across the city. Sarah slowly unravels the sad story of Rosa, the Mexican house maid who was murdered in the house. Although the rest of the world knows that Adam Holt killed Darlene when she tried to deliver a pizza, no one knows about the death of Rosa. Sarah learns to use her spiritual sensitivity to communicate with Rosa, piecing together the crime that ended her life. Sarah also learns that someone wants Rosa to stay hidden and even Tony warns her to be careful. She is startled by the extent of her attraction to Tony, and ends up sharing more of her experiences with him than she normally would. After much searching and putting pieces together, Sarah realizes that Tony is actually Adam Holt. She has been in incredible danger every time that she has been in his company. The story ends with a police showdown: Tony/Adam has Sarah trapped in a police car with a knife, but she is rescued by the officers.

Ultimately, Sarah learns to believe in herself and trust herself. The feeling of not fitting in and the hurt of her old friends abandoning her fades away with her newfound confidence and Sarah is finally able to overcome her fear of the water.

More summaries and resources for teaching or studying Whispers from the Dead.

Whispers from the Dead from BookRags. (c)2022 BookRags, Inc. All rights reserved.