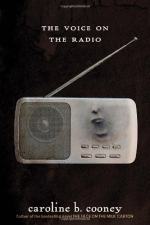 The Voice on the Radio Summary & Study Guide

Caroline B. Cooney
This Study Guide consists of approximately 43 pages of chapter summaries, quotes, character analysis, themes, and more - everything you need to sharpen your knowledge of The Voice on the Radio.

The Voice on the Radio Summary & Study Guide Description

The Voice on the Radio Summary & Study Guide includes comprehensive information and analysis to help you understand the book. This study guide contains the following sections:

This detailed literature summary also contains Topics for Discussion on The Voice on the Radio by Caroline B. Cooney.

The Voice on the Radio by Caroline Cooney is the third in the 'Janie' series, a total of four books. Author Cooney weaves a story that centers on a teenage girl and her two families. Janie Johnson, born Jennie Spring, had been kidnapped as a child - lured away by a young and troubled girl, Hannah Johnson, who then had given Jennie to her mother telling her she is her own. Mr. and Mrs. Johnson happily take on the task of raising their granddaughter, treating her as their own. Everything is fine until one day in the cafeteria at school when Janie sees her picture on a milk carton. Now, a year after everything has come to light and the grudging realization by the Spring family that the Johnson parents are blameless, Janie is finding her way.

In this continuing story, Janie has the opportunity to get to know the Spring family better. Though reluctant to expose herself emotionally at first, in this segment of the saga Janie not only begins to open up, but even bonds with her birth family when she discovers that Reeve is not who she believed he was.

It begins simply - Jodie wants to go to Boston to scout possible universities. The Spring family is still adjusting to the reality of Janie's return, and only agree to let Jodie go when her brother Brian offers to go along to keep her safe. Approval is given and they eagerly make plans for this rare chance at freedom, deciding to stop and see Janie on the way. Janie decides to go with them, hoping to surprise her boyfriend Reeve who goes to college in Boston. When they get there, they check into the Marriott, and settle in to listen to the radio show Reeve works on. What they hear next changes everything. It turns out that Reeve is very well known for the show he's been broadcasting for several weeks. A betrayal beyond belief will affect Janie to her very core, and deeply impact her Johnson and Spring families. A pact of secrecy is made, but of course nothing will ever be the same now. Jodie's dreams of going to college in Boston are over, spoiled by this trip. Brian can't reconcile that the person he so admired could behave with so little care. Until then, it had been them against the world. Now, the damage is much more personal.

Brian, Jodie and Janie are hoping to bury the whole mess, giving Reeve no choice but to comply. He hasn't been entirely honest with them though. Reeve still has a secret. Janie, Jodie and Brian are not the only ones to have heard his broadcast recently. Will he be able to keep his secret?

More summaries and resources for teaching or studying The Voice on the Radio.

The Voice on the Radio from BookRags. (c)2022 BookRags, Inc. All rights reserved.