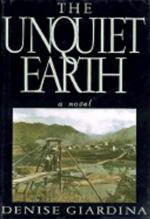 Denise Giardina
This Study Guide consists of approximately 38 pages of chapter summaries, quotes, character analysis, themes, and more - everything you need to sharpen your knowledge of The Unquiet Earth.

Rachel hears on the radio that President Kennedy has been shot and killed. She wonders if Dillon hears the news where he is serving five years in the federal penitentiary in Atlanta. Rachel and Jackie go to the trial and afterward, Jackie is quite upset. Dillon doesn't write Rachel or Jackie which hurts them both. Jackie is glad Kennedy was shot. He's the one who put Dillon in jail. The trial had been US vs. Dillon Freeman.

Jackie learns that there is a big difference between sixth and seventh grade. The boys had liked the smart girls in sixth grade but like the girls who have grown big chests over the summer in the seventh grade. Jackie can't even fit in a training bra but she is getting all As and Bs. She and...

More summaries and resources for teaching or studying The Unquiet Earth: A Novel.

The Unquiet Earth: A Novel from BookRags. (c)2022 BookRags, Inc. All rights reserved.