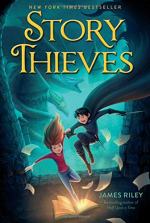 Riley, James
This Study Guide consists of approximately 57 pages of chapter summaries, quotes, character analysis, themes, and more - everything you need to sharpen your knowledge of The Story Thieves.

This detailed literature summary also contains Quotes and a Free Quiz on The Story Thieves by Riley, James.

As The Story Thieves opens, Bethany Sanderson and Owen Conners are in a boring math class. After school, Owen goes to the library where his mother works. He spends some time at the check-out desk and then straightens and shelves books. He is surprised in the children's section when he sees Bethany jump out of the pages of a book. Owen is an avid reader and thrilled by Bethany's ability. Bethany, however, does not want to let Owen any closer to her secret. So, hoping to stop his questions, she bribes him by bringing him a gobstopper from the Willie Wonka novel. Owen feels his life is so boring that he cannot let it go. Finally, Bethany reveals that her father is a fictional character who came from a book, which makes her half-fictional. As such, she has the ability to jump into the pages of books. She tells Owen that she is always careful not to interact with the main characters or to change the story line of a book in any way. Bethany says she has established her own rules, based solely on what she feels to be right.

The one thing Bethany wants more than anything else is to find her father. On her fourth birthday, Bethany got a book as a present. She took all her young guests and her father into the book. Bethany returned with the other children, but her father never returned to her. Her mother has forbidden her from jumping into books, but Bethany secretly continues to do so as she searches for her father. Owen tells Bethany about a spell book that exists in a Kiel Gnomenfoot book. The book is in the popular series about magic, and Kiel is the main character. Owen convinces Bethany that they can step into that story, find the spell, and use it to find Bethany's father. He tells her he simply wants to see the setting for the story, and he promises to abide by her rules.

What Owen has not told Bethany is that they are stepping into a scene in which Dr. Verity is about to attack Magister. Owen believes he can save Magister and become a hero to the readers. Bethany an Owen find the spell, and Owen stops Dr. Verity. However, the situation quickly escalates out of control with Magister sending Owen to a virtual prison while he and Kiel go to the real world, using power the Magister stole from Bethany.

Magister is furious to discover he is a fictional character in a fictional world. He believes he has no free will and that he is living out the life someone else has chosen for him. He becomes determined to rescue all fictional creatures from books, though Kiel refuses to help him. Meanwhile, a man called Nobody rescues Owen, and they return to the Magister's castle. Owen fully expects that Bethany will quickly return Magister and Kiel to the book, so he remains, standing in Kiel's place to keep the story moving along. Owen initially loves the excitement, certain that he – as a main character – will not actually be killed. He comes to learn that the author has planned for Kiel to sacrifice his life in order to save the people of his world.

Meanwhile, Bethany struggles to get control of Magister with Kiel's help. Magister continues to release fictional creatures, including dragons and a giant. Eventually, Bethany traps the Magister in a boring math book. She manages to get Owen out of the book just after Dr. Verity has replaced his heart with a robotic version and just before Dr. Verity opens a vault that he believes holds the key to destroying his arch nemesis. With the help of the author, Jonathan Porterhouse, Bethany finds a plot hole in the novel and has Jonathan rewrite the ending so that Kiel survives and Dr. Verity is defeated. Kiel simply disappears from the end of the novel.

With everything back to normal, Owen finds he is happy to live in the boring world where he is not in danger. He realizes that their principal, Mr. Wilcox, is Nobody, who is also Bethany's father. Bethany, however, has learned that she needs to have some fun with her ability. She convinces Owen to go into the book titled Narnia with her. She says they will have a companion for their journey. Just then, Mr. Wilcox arrives in the classroom to introduce a new student. Kiel Gnomenfoot enters the room, introduced as Kyle.

More summaries and resources for teaching or studying The Story Thieves.