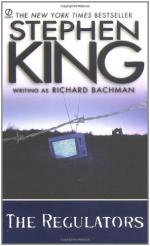 Stephen King
This Study Guide consists of approximately 37 pages of chapter summaries, quotes, character analysis, themes, and more - everything you need to sharpen your knowledge of The Regulators.

The Regulators Summary & Study Guide includes comprehensive information and analysis to help you understand the book. This study guide contains the following sections:

This detailed literature summary also contains Topics for Discussion on The Regulators by Stephen King.

The Regulators is a novel by Stephen King alter ego Richard Bachman. In this novel, an entire neighborhood is terrorized by the mind of an eight year old autistic boy. This boy's mind has been hijacked by an ancient creature that is forced to take a human host in order to use its powers to control and torture those around it to gain energy. However, this creature has no idea that it has met its match in eight year old Seth. The Regulators is a classic novel of horror filled with the same twists and turns that King fans have come to expect from the horror master.

It is a normal summer day in an Ohio neighborhood. The paper boy is making his rounds, one neighbor is washing his car while another is watering his lawn. Suddenly a strange van with some kind of satellite dish on its roof pulls up behind the paper boy and shoots his with a double barreled shotgun. Seconds later, the gun is pointed at a couple of arguing children at the corner convenience store, but is distracted by a loving and curious dog. The dog too is shot.

The neighbors all come out onto their lawns to see what has happened. Collie Entragian, a disgraced cop, takes control of the situation and sends everyone to their respective homes in hopes of offering some protection should the van come back. At the same time, children's author Johnny Marinville attempts to call 911 from his house. However, instead of getting the calm voice of a 911 operator, Johnny hears the voice of a child who tells him a riddle and then warns him not to try to call out again.

Mary Jackson, unaware of the excitement on her quiet street, comes home from an afternoon tryst with her lover, worried more about her husband learning the truth than the strange van following closely behind as she approaches her house. Mary is rammed by the van twice, causing her car to crash on her front lawn. Stunned, Mary steps out of her car and is shot by a double barreled shotgun. A neighbor, David Carver, is also shot and killed on his own front lawn. The rest of the neighbors gather around, trying to figure out what to do when several more vans come along the street and begin to fire. The neighbors take refuge in the two houses where the previous shooting took place.

Another girl is killed in the rush to get to safety while another loses an arm. As the neighbors try to regroup and figure out what is happening to them, the vans return and open fire on the houses where they have taken refuge. Another woman is fatally wounded when a copper pot explodes over her head. In the aftermath of this destruction, a group of people in each house decide to go for help using a path that runs along the woods behind the neighborhood. However, neither team tells the other. When they meet in the woods, a panicked teenager shoots and kills Collie Entragian. This teen, so grieved by what he has done, takes his own life.

When the groups get back to the houses where they have taken refuge, they discover that another neighbor, Audrey Wyler, has joined them. Audrey has information that helps the neighbors understand what is taking place. Audrey's nephew, Seth, has been possessed by some sort of ancient creature and it is this creature that has turned the neighborhood into some sort of child's western fantasy.

Audrey and Johnny Marinville go to Audrey's house in hopes of stealing Seth out of the house and away from the creature while they are temporarily separated. However, the creature has figured out their plan and tries to reenter the boy. This causes the boy to use his telepathy to encourage the grieving mother of a teenage boy to kill both Seth and Audrey. The creature then tries to enter the mind of the grieving mother, but she cannot handle his power and her head explodes. The creature disappears and the neighborhood returns to normal.

More summaries and resources for teaching or studying The Regulators.

The Regulators from BookRags. (c)2022 BookRags, Inc. All rights reserved.