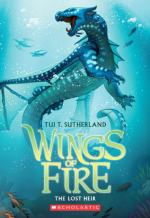 Tui T. Sutherland
This Study Guide consists of approximately 58 pages of chapter summaries, quotes, character analysis, themes, and more - everything you need to sharpen your knowledge of The Lost Heir.

This detailed literature summary also contains Quotes and a Free Quiz on The Lost Heir (Wings of Fire #2) by Tui T. Sutherland.

The land of Pyrrhia is embroiled in a bitter war that has been ongoing for years. Three sisters, Blister, Burn, and Blaze, are fighting for the throne left vacant by the unexpected death of their mother. The three have proved themselves ruthless in their quest for power. They have created alliances with various other dragon tribes. The war has taken such a toll that some dragons believe that the fulfilling of a prophecy is the only hope that it will end. The prophecy, issued by a NightWing dragon named Morrowseer, predicts that five dragons will name the new queen and bring an end to the war. The five being touted as the prophecy dragonets are a SeaWing named Tsunami, a MudWing named Clay, a NightWing named Starflight, a RainWing named Glory, and a SandWing named Sunny. They have been gathered and guarded by members of a group known as Talons of Peace. Each of the dragonets has strengths as well as quirks. They lived the first six years of their lives in isolation. Now they are wandering the world together in the hope of finding a safe place while deciding how to fulfill their destiny.

All the dragonets were taken from their homes as eggs, some handed over willingly while others were stolen outright. Tsunami learns she is a princess, the daughter of Queen Coral. She believes she will be received with joy and will feel immediately at home in the sea. She quickly discovers she is at a loss because she does not know Aquatic, the language SeaWings use underwater. Sea water chafes in a way river water does not, and Tsunami discovers that SeaWings ride currents instead of swim. Coral is thrilled to be reunited, but Tsunami learns she has a younger sister and two sisters still in their eggs, waiting to hatch. In the previous novel, Tsunami was forced to fight a SeaWing dragon named Gill who had gone mad from thirst, and she discovers that Gill was her father, meaning these two dragonets are the last of Coral's line.

Coral is allied with Blister, who is involved in some conspiracy with Morrowseer, and Tsunami and the others hope Blister will prove herself a suitable candidate for queen. After just a short time, Tsunami discovers that Blister is every bit as cruel and manipulative as Burn and Coral is weak and bends to Blister's demands. When Blister becomes angry that the prophecy dragonets are not willing to endorse her for queen, she demands for Coral to imprison them. To Tsunami's dismay, Coral agrees. After a very short time, Tsunami's sister Anemone arrives and sets the stage for the dragonets to escape just as SkyWings begin to attack the palace. Tsunami feels driven to fight alongside the other SeaWings, but she chooses to remain with the prophecy dragonets instead. They make it out of danger, but a friend is injured and the dragonets have no idea how to help him. They decide that RainWing dragons are most likely to help and that Glory deserves a chance to find her parents. As the dragonets set out on their next journey, Blister meets with Morrowseer (who issued the prophecy) and Nautilus (a member of the Talons of Peace). They are discussing an alternative plan if the dragonets do not behave correctly. They hint that the prophecy is negotiable with the only possible outcome being to place Blister on the throne.

More summaries and resources for teaching or studying The Lost Heir (Wings of Fire #2).