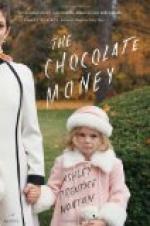 The Chocolate Money is a novel by author Ashley Prentice Norton. In this novel, Bettina Ballentyne is the only child of a chocolate heiress, Tabitha "Babs" Ballentyne, of Ballentyne Chocolate. Babs is not a typical mother. From a young age, Babs talks to and treats Bettina as if she is an adult. While in some respects, this prepares Bettina for the ups and downs that life has to offer, on the other hand, Bettina doesn't have a loving and caring mother who emotionally cares for her just as much as she provides for her in material items.

The novel follows Bettina from the time she is about ten years old until she turns twenty-six. As the story unfolds, Bettina fits into her mother's social life when, where, and how Babs chooses for Bettina to be there. At fifteen, Bettina starts to spend time with other girls her age when she starts to attend boarding school in New Hampshire. Not only does Bettina get herself into a situation where the other kids don't know how wealthy her family is, but she ends up getting caught having sex with the son of one of her mother's former lovers.

By the end of the novel, Babs has been hit and killed by a car, leaving Bettina with millions of dollars. In spite of now taking her place as the chocolate heiress, Bettina still longs for the simple things in life—a job and people in her life she loves and who love her back.