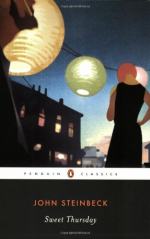 John Steinbeck
This Study Guide consists of approximately 45 pages of chapter summaries, quotes, character analysis, themes, and more - everything you need to sharpen your knowledge of Sweet Thursday.

The brothel owned by Fauna where Suzy gets a job the same day she arrives at the Cannery Row.

Cannery Row- A community in Monterey that got its name because they used to can fish. They closed down the cannery after all they ran out of fish because they caught them all.

Golden Poppy- The diner owned by Ella where Suzy goes to when first arriving to Monterey. Suzy also ends up getting a job here after she leaves the Bear Flag.

The building in which Mack, Hazel, Whitey No.1, and Whitey No. 2 live. They used to rent the place from Lee Chong before he left town but they never actually paid him.

Doc's home and laboratory where he collects specimens and sells them to those in the science field.

A locomotive's front end that the Cannery used...

More summaries and resources for teaching or studying Sweet Thursday.