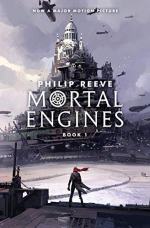 Philip Reeve
This Study Guide consists of approximately 80 pages of chapter summaries, quotes, character analysis, themes, and more - everything you need to sharpen your knowledge of Mortal Engines.

The following version of this book was used to create the guide: Reeves, Philip. Mortal Engines. Scholastic Inc., 2018.

Mortal Engines begins with an introduction to the Traction City of London and its most recent history. The narration then moves to focus on one of the main characters of the novel, Tom Natsworthy. Tom is a Third Class Apprentice with the Historian Guild, which is the lowest class he can be in the Historian Guild. Due to his low status, he is picked on by Apprentices of higher classes. On the particular day that the novel starts on, he sneaks away from his duties to watch London chase a small traction town named Salthook. The Historian he is working under, Chudleigh Pomeroy, discovers that Tom has shirked his duties and punishes him by assigning him Gut-duty. However, Tom is in luck, as the most famous London Historian, Thaddeus Valentine, is supervising the dismantling of the small town. Valentine has also brought along his beautiful daughter, Katherine.

While Tom is working with Valentine, he spies a suspicious looking girl who then tries to murder Valentine. Tom prevents the murder and chases after the girl as she flees. An Apprentice Engineer hears Tom's cries and joins the chase. It ends at a waste chute, where she accuses Valentine of doing something to a woman named Hester Shaw and then she jumps down the chute. Valentine finally catches up and Tom relays what the girl had said. After Tom was done with his story, Valentine pushes him down the waste chute while the Apprentice Engineer watches from the shadows.

Back at London, Katherine Valentine becomes suspicious of her father after she listens in on a conversation between him and the Lord Mayor of London. She wonders if Tom and the assassin could be alive, why the Lord Mayor has her father going on a secret mission, and what is the MEDUSA thing they spoke.

Meanwhile, Hester and Tom are lured onto a small traction town named Speedwell, whose residents attempt to sell the pair at a trading cluster. They escape their prison at the trading cluster and are helped in their escape by an aviatrix named Anna Fang. Anna Fang takes the pair to a floating city called Airhaven in order to help them book passage back to London. She presses Tom about information on London, and Tom begins to believe that she is working with the Anti-Tractionist League.

In London, Lord Mayor Crome has sent a Resurrected Man from the Sixty Minute War, named Shrike, after Hester Shaw and sent Valentine on a secret mission. Katherine watches as her father leaves and resolves to get to the bottom of things now that he is gone.

While in Airhaven, Shrike arrives and attempts to kill Hester, while causing Airhaven incredible damage. Hester and Tom escape in an air balloon and land on the ground again.

Back in London, Katherine has a meeting with the Lord Mayor to get some answers but when she mentions MEDUSA he threatens her and her father and their status in London so she resolves to visit the Apprentice Engineer that had also been present for the chase.

The narration turns back to Hester and Tom as Shrike finds them once again. However, he is run over by a traction suburb being chased by another. Tom and Hester are able to jump aboard the pursuing suburb, only to discover it is run by pirates. The pirates capture them but the Lord Mayor, Peavey, releases Tom as he wants Tom to teach him how to be a respectable gentleman. Tom is also able to get Hester released. The pirates then make for the Sea of Khazak and Peavey surprises them all by turning the suburb into a floating city to try to attack the Black Island, where Airhaven is currently grounded. However, the city is destroyed by Anna Fang's airship and only Hester, Tom, Peavey, and a few other pirates make it to shore. Peavey falls into quicksand and is killed by his own men. Just as the other pirates are about to turn on them, Shrike appears to kill Hester and Tom.

While these events are happening, Katherine secretly meets with the Apprentice Engineer, whose name is Bevis Pod. Katherine convinces him to help her sneak into a meeting at the Engineerum, where they discover that London has recreated an ancient weapon that will help them destroy the Shield-Wall of Shan Guo and rule the earth. Here, the narrations intertwine as Hester and Tom are confronted by Shrike, who wants to kill Hester and take him back with her.

From London, Katherine watches as MEDUSA prepares to fire on a large city that is chasing London. Once it fires, it illuminates the entire night and leaves the larger city a smoldering mess.

As soon as Tom kills Shrike, they see a light that illuminates the entire night and then fades. Anna Fang and a group of islander come upon Hester and Tom and take them in. After Tom is bandaged, he and Hester again board Anna's ship, which is bound for Shan Guo to warn the Anti-Tractionists of London's new weapon.

In London, Katherine gathers the beginning of a resistance with the Historians and she discovers how Hester is connected to her father and that he killed Hester's parents.

Anna, Tom, and Hester make it to Shan Guo to warn the Anti-Tractionists. While there, Tom is upset at the plan to bomb London. He goes on a walk to clear his head, and he discovers Valentine. He reports it to Anna after a debate with himself, but it is too late and Valentine has burned the airships of Shan Guo. Valentine murders Anna and escapes. Tom and Hester make the decision to go after him and take off in Anna's ship.

In London, Valentine returns and Katherine confronts him, calling him a fool. She and Bevis come up with a plan to make a bomb to destroy MEDUSA but their plans are discovered by the Engineers. The Historians prevent Katherine and Bevis' capture and fight off the Engineers. She and Bevis then take a secret passage up to the Top Tier of London to plant the bomb.

Meanwhile, Hester lands on London, determined to find Valentine, while Tom circles above. Tom has to fight off Valentine's henchmen and shoots down Valentine's airship. As he does so, Katherine and Bevis emerge and Bevis is killed by the debris. Hester is captured and brought to St. Paul's cathedral, where MEDUSA is, just as Katherine is able to sneak in there. Katherine sees that her father means to kill Hester and throws herself in front of Hester to stop it. She is mortally wounded and falls upon the MEDUSA controls, causing it to malfunction. Hester leads Valentine, who is holding Katherine, up to the top as Tom flies in to pick them up. Katherine expires and Valentine tells Hester and Tom to leave without him. They do just as MEDUSA explodes, destroying all of London. Hester and Tom are both devastated by the destruction but they resolve to fly the airship to the Black Island or other areas and they both know they will be alright.

More summaries and resources for teaching or studying Mortal Engines.